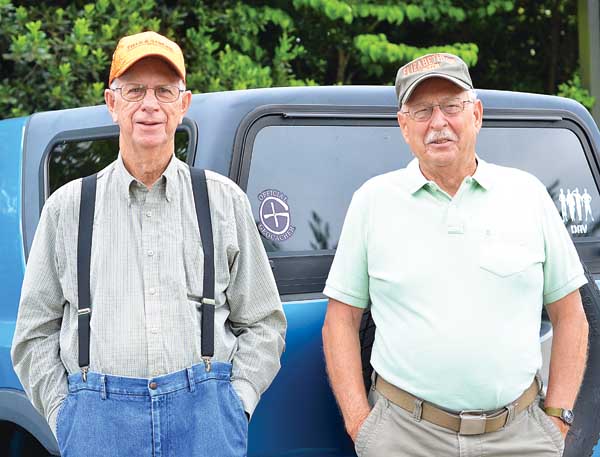 They grew up together in Shell Creek, playing outdoors, joining in each other’s family reunions and poking around the woods till they became adults. Then, Kelly Vance went into the Air Force, and Robert Hoss worked for Great Lakes Research. Now in their 70s, they hit the hills weekly as part of the world’s largest treasure hunt: “geocaching.”
Over two million geocaches are hidden worldwide. They are located using global positioning systems and are located in some of the most obscure locations. For Vance and Hoss, that is part of the allure. Caches can range from the size from a key chain to the size of an suitcase, but most are on the smaller end of the scale.
“I’ll be 73 in June and Robert will be 74 Sunday, and we’re still hittin’ the hills,” Vance said. “Me and him — we just love the mountains. If there weren’t any geocaches, we’d still go.”
Caches are often filled with knick knacks, and cachers typically leave something or trade an item with the goods in the container. Each contains a logbook, on which cachers leave their names. Vance logs himself as “PP Smurf,” and Hoss simply goes by “Hoss.”
They primarily hunt for the mountain caches, and they leave what they call “road kill” —roadside caches— for others.
Almost all the caches in Carter, Sullivan, Greene, Washington, Avery, Mitchell, and Unicoi Counties have their names in the logbooks. But despite their expertise, they can’t seem to get their friends to join.
“We don’t see people our age doing it,”Hoss said.
“We know a lot of people and can’t get anybody to go with us,” Vance said. “They don’t realize what’s out there.”
Though they see about five other names frequently on the cache logbooks, Vance said he doesn’t think any of the others are as traversed in the mountain caches.
The two have been at it for more than six yeas, but they never meet others that do it. Some common names they see are Rivergirl Smiles, Pork’n’beans and D.M. Flyer. Flyer’s name is in most of the logbooks they find.
“You get to know a lot of people doing this even though you never meet them,” Vance said.
Vance and Hoss don’t hunt them to just to sign the books, but rather because it leads them to unique sites to which they may never have been.
“Young people would be surprised at what we find,” Hoss said.
Old homesteads, logging roads, an abandoned lead mine, a canyon, 100-foot cliffs, waterfalls, and downed planes are just some of the bounties of their ventures.
“We wander into a lot of things and don’t know what it is, but we enjoy it,” Vance said.
Hoss added the only thing they haven’t found yet is a dead body.
“We’ve never seen a rattlesnake or a bear,” he added. “We’ve been so close we can smell the bear, and we know they’ve seen us, but we never see them.”
“I told Kelly the day we find a snake will be the day one bites us,” Hoss said. “We’ve been in some pretty snakey places.”
“You wouldn’t believe where we go<” Vance added. “We don’t believe it ourselves.” Their adventures are not without mishaps, but they say it’s worth the banged up knuckles and the occasional tumbles to walk along trails that know one knows. “We’ve taken some tumbles, but no bad accidents yet,” Vance said. Hoss once slid down Holston Mountain on his hand and now has white scarred knuckles from it. He also tripped and fell down in Rocky Fork and came up with his glasses slanted and mud on his face. “We’ve got war wounds,” he said. Once they were caught in an electric storm on Ripshin Creek. “That was interesting,” Vance said Almost nothing deters them from getting out weekly and hiking 6-7 miles or more in search of caches. They once spent two years looking for one. On occasion, they hunt on a full moon, following reflectors in the woods to hidden cache sites. Vance said they always take cell phones and a HAM radio, but they aren’t as aggressive as they once were. “We realize we could get hurt out there, and we don’t want to have to be rescued,” Hoss said. On Sunday, May 22, Hoss turns 74, and in June, PP Smurf turns 73. They continue to anticipate the unknown, the faraway places, the trails beyond the trails. The treasure they find in the woods is more than a box of assorted trinkets and a logbook. It is the story of those who went before them and a legacy for those who will follow on a quest for the uncharted. “We just get out and plunder,” Vance said. Hoss added, “This is pretty serious stuff.” Anyone interested in geocaching with the masters can contact Vance at 423-957-3421.
You Might Like

An Elizabethton woman who police say had a sexual relationship with a 15-year-old child who lived in her neighborhood was... read more