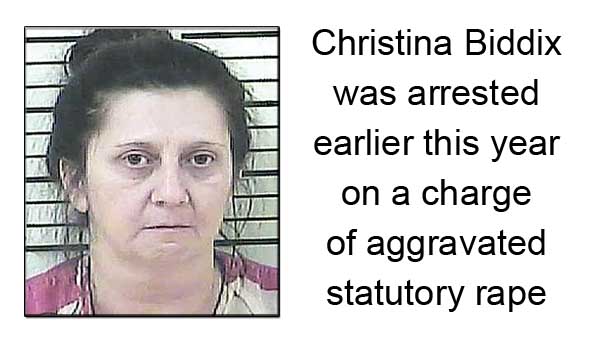 An Elizabethton woman who police say had a sexual relationship with a 15-year-old child who lived in her neighborhood was bound over to a Carter County Grand Jury on Friday on a charge of aggravated statutory rape.
Christina Gail Biddix, 44, of 104 Brookdale Drive, Apt. A, appeared in Carter County General Sessions Court on Friday, along with her attorney David Crockett, for a preliminary hearing of the case against her.
A preliminary hearing is a routine court proceeding when a person has been charged with a crime. The presiding judge holds a preliminary hearing to determine if enough probably cause or evidence exists for prosecution to continue.
At the conclusion of Friday’s hearing, Judge Keith Bowers Jr. ruled there was sufficient cause and evidence to proceed and bound the case over to a grand jury.
The charge against Biddix stems from an investigation by the Elizabethton Police Department which began in January. On Jan. 10, EPD Cpl. James Sexton went to Biddix’s apartment in reference to a runaway 15-year-old male, who had returned home prior to Sexton’s arrival at the apartment.
The juvenile’s mother told officers she suspected her son was having an inappropriate relationship with Biddix, who lived near them. When officers spoke with the juvenile, he admitted he and Biddix had been having a sexual relationship, beginning about two or three months after Biddix moved into the neighborhood in March 2015, EPD Detective Sgt. Christopher Bowers said.
The mother allowed officers to take her son’s cellphone into evidence and gave her permission for investigators to search through the phone. Bowers said the cellphone contained photographs of Biddix and the juvenile lying together on a couch and kissing each other.
“I also observed text messages between the two in which they say they love each other and one text where Ms. Biddix tells (the juvenile) to tell his mother he has been at her residence for ‘homework,’” Bowers said.
Because of the age difference between Biddix and the male juvenile, she was charged with aggravated statutory rape. Under state law, aggravated statutory rape occurs when a sexual act takes place between a victim that is at least 13 years old but younger than 18 years old, and the suspect is at least 10 years older than the victim. In the arrest warrant, Bowers notes that Biddix is “28 years, eight months and 14 days” older than the juvenile.
Under state law, aggravated statutory rape is classified as a “Class D” felony and is punishable by 2-12 years in prison and a fine.
Police arrested Biddix on Jan. 13 on one charge of aggravated statutory rape. She was released from the Carter County Detention Center on Jan. 14 after posting a $10,000 bond.
Biddix is scheduled to appear in Carter County Criminal Court on July 22 in this case.

Mayor tells committee they have ‘no authority’ to question…