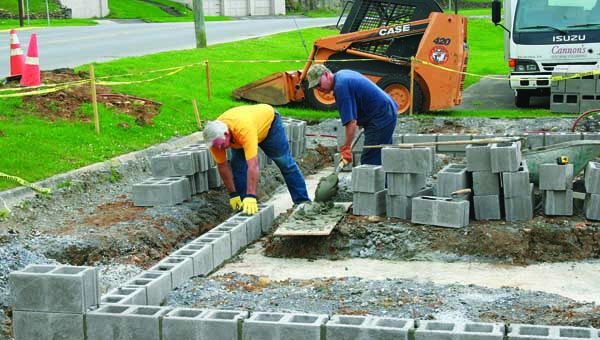 Star Photo/Abby Morris-Frye
Carter County Car Club members Randy Payne, left, and Lynn Taylor work to lay block for the bathrooms being constructed downtown as a joint partnership between the club and the City of Elizabethton.

Work is currently underway on a new building that will house public restrooms for downtown Elizabethton.
The project is a collaborative effort between the Carter County Car Club and the City of Elizabethton and will
“The Car Club came in and asked if they could build the restrooms,” Elizabethton City Manager Jerome Kitchens said.
Since that time, the City and the Club have worked together to turn their shared vision into a reality.
“We paid for the designs because we wanted it to blend with the War Memorial area,” Kitchens said. “We also have a railroad theme for the building which ties in with the Tweetsie Trail.”
When the building is finished, it will feature brickwork like that found in the War Memorial and will be constructed to look like an old train depot station, Kitchens said. The restroom building is located in the public parking lot behind the shops in the 400 block of East Elk Avenue. The parking lot is bordered by Armed Forces Drive and East F Streets and the Tweetsie Trail runs nearby.
The building is being constructed through volunteer labor from Car Club members and others from the community.
“Since it is volunteer work, they are in and out of there as they are available,” Kitchens said.
Both the City and Club hope the project will be finished in about four weeks, but that may change based on the availability of volunteers, getting materials to the site as needed and, as always, the weather.
Randy Payne, a member of the Car Club, is spearheading the construction project. Having spent his career as a contractor, Payne is no stranger to the construction process and he is using the connections he has made in his business to help with this project.
The restroom building is being constructed with money raised by the Car Club, but Payne said many area businesses and professionals are helping to make it happen.
“We bummed a lot,” Payne said with a laugh.
Payne said he has worked with Lowe’s Home Improvements, General Shale and Builder’s First Source to get the materials needed for the project.
“They all jumped on board to help,” he said. “They’ve either let us have it for cost of they just gave it to us.”
In addition to those businesses, Payne said Osborne Electrical is providing all of the electrical work for the building for free, Danny Churchill Plumbing is providing all of the plumbing work for free and Doug Slagle dug out the footers for the building at no charge.
“We’re going to do a Donor Board,” Payne said. “Everyone who donated materials, labor, time or money will be on that board.”
To tie in with the train depot theme, the board will be designed to look like an old train station schedule board. Glen McQueen with Brumit Sport Shop in Elizabethton is going to be donating all the plaques for the Donor Board, Payne said.
Payne was also quick to thank the City of Elizabethton and it’s employees for their work and help with the project. He said both Kitchens and General Manager of Water Resources Johann Coetzee have been important to bringing the project to life.
The City of Elizabethton has finished work installing water and sewer lines to the site. On Thursday, a city work crew was working to repair a portion of pavement at the corner of Armed Forces Drive and East F Street that had to be torn up for the pipeline installation. Kitchens said the city has also pledge to help cover the costs of needed items if the Car Club donations were to fall short.
Payne said the Car Club is still looking for donations of money or supplies for the project as well as volunteers willing to donate their time to help with construction. He said donations can be sent through the City of Elizabethton by marking them for the Downtown Restroom project. Those wishing to volunteer labor should contact Payne at 423-542-5123.