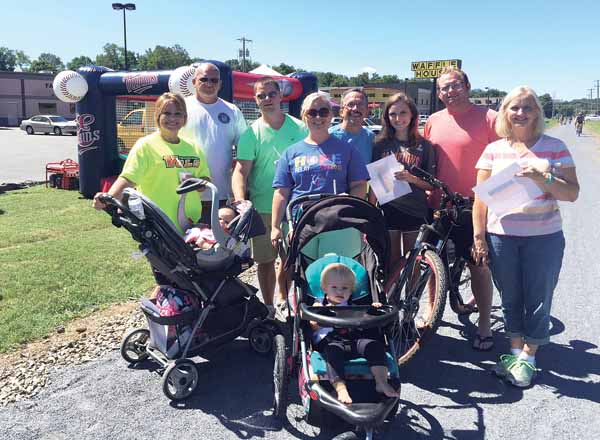 Photo Contributed
Traffic on the Tweetsie Trail spanned far and wide through Elizabethton Saturday during the second annual Tweetsie Trail Treasure Trip. Pictured, participants are all smiles after stopping by one booth near Pizza Inn.

It was a win-win across the board during Labor Day weekend in Elizabethton.
In an effort to scale back from its inaugural predecessor, the second annual Tweetsie Trail Treasure Trip and Celebration, sponsored by the City of Elizabethton and the Elizabethton Parks and Recreation Department, held Saturday surpassed expectations, according to Parks and Recreation Director and Elizabethton Twins General Manager Mike Mains.
“This has been such a great day,” Mains said while posted up at one of the stops on the Tweetsie Trail near Pizza Inn in Elizabethton. “We really looked at a way to scale this back from last year, with it being our first, but this year has been fantastic.”
While final numbers were unavailable, Mains added the event grew compared from last year, as far as attendance goes, with several hundred attendees descending to Elizabethton to take in the sights and sounds of the area.
“We’ve seen hundreds come by, walk the trail, and participate in different events,” Mains said. “We’ve had more people than last year and, honestly, I would say this is my favorite event to be part of.”
Section One of the Tweetsie Trail, linking Johnson City to Sycamore Shoals was completed in 2014 and since that time, the nature asset provided a link between the region to present the beauty of the area.
“I’m sure all of us in recreation hoped that once this trail came through our area, we could incorporate it to where families could come out and use it together,” Mains said. “That’s what we’ve seen today. All age groups using the trail, families walking with each other … it is just a great thing to see.”
The Treasure Trip portion of the day saw attendees participate in different activities at different “Golden Depots” across the city. The depots included Sycamore Shoals State Park, Elizabethton High School, Elizabethton-Carter County Chamber of Commerce and Tourism, Elizabethton Parks and Recreations and the Downtown Business Association.
“This event, in particular, also showcases our city,” mains said. “If you notice, we started at Sycamore Shoals state park, which is a part of our history. We ended this event downtown, so that people can come in and see what our town has to offer. That was showcased today in so many different ways and really is a credit to all our organizations coming together to show what Elizabethton has to offer.”
Mains looked back at the summer with fondness, as the weekend concluded a busy stretch for the Parks & Rec department. Officials concluded Saturday with a celebration event at Covered Bridge Park ended the weekend with the Big Splash Event at Franklin Pool to end its year of service for the area.
“I don’t think there’s anyone that can say there’s nothing to do in Elizabethton,” David Nanney, the department’s recreation manager, said Saturday. “Tonight, you have a minor league baseball playoff game. We’ve got the Tweetsie Trail Celebration going on tonight with three awesome bands and awesome prizes to give away. Who wins during all this? Our community wins, our town wins.”
The Parks & Rec director added that the Tweetsie Trail Treasure Trip and Celebration will only grow as the years go on.
“That’s the best thing about this,” Mains said. “You look at this kind of event, and it can only grow. As you walk down this trail, you see all the different businesses in town and they notice that. We encourage any business that wants to get involved for next year to contact us.”