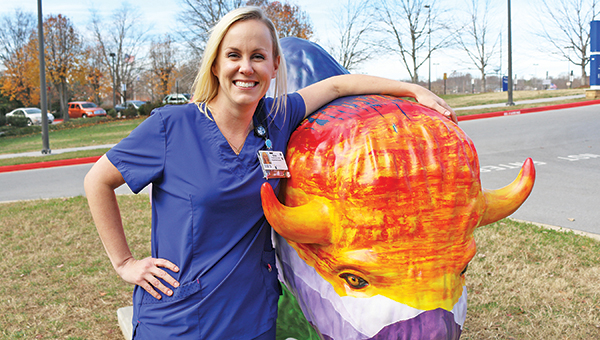 Being busy is an understatement for Samantha Turbyfill.
The Elizabethton native is the mother of two children and works at the Johnson City Medical Center as the head of the outpatient clinic for neuroendovascular surgery. With the loaded-agenda, Turbyfill checked off an accomplishment by walking down the aisle on Friday, Dec. 9, during Milligan College’s Commencement, being part of the school’s first Adult Degree Completion Program for RN-BSN.
“It really didn’t hit me until today,” Turbyfill explained about graduation on Thursday, Dec. 8. “When I went to pick up my cap and gown and it finally hit me. Here I am, almost 36 years old and I will finally have my bachelor’s degree. It doesn’t really change anything as far as my job goes but just to be a graduate from Milligan College, it is a big deal. If you live here, you know how prestigious of a school it is.”
Turbyfill was able to have a breather Thursday. Her department, which works with stroke patients, had a busy day ahead with two brain surgeries on the docket.
“After they leave the hospital, I do all their follow-up care,” Turbyfill said. “Make sure they follow up with their doctors, make sure they have somebody to call in case things start getting weird.
“I’ve been here almost five years. The whole time I’ve been here, I’ve worked with stroke patients. I used to work on the acute care floor but then I came here to handle outpatient services. I sort of work as the in-between person for patients and their doctors.”
Johnson City Medical Center has emerged as one of the top clinics in the area when dealing with patients battling with strokes. The development of medicine over the years has allowed patients that had a thrombectomy or cerebral aneurysms receive treatment in less stressful ways. While discussing different patients, Turbyfill added two patients were seen inside the clinic — one that had a thrombectomy and aneurysm fixed while another stroke patient didn’t require any surgery at all.
“It has been an incredible experience. It’s a joy to meet everybody,” she said.
While enjoying her career now, it was the encouragement of a friend that led her down the current line of work.
When discussing graduating, Turbyfill joked about the timeframe it took to get her bachelor’s degree.
“This has been the longest time it has taken anyone to get a bachelor’s degree, ever,” she said with a laugh. “I started out at ETSU in 1999 and thought I wanted to be a teacher … I had no idea what I was doing.
“My friend decided we should go to LPN school instead and I didn’t want to go,” she continued with a smile. “But she said ‘we’re going, you’re going to love it’. Since then, I loved being a nurse. I went back to school and got my RN at Walters State.”
Following up her time in Morristown, the proud Milligan graduate recalled the time when she heard the news about the school’s program to obtain the BSN.
“I was here, up on the stoke floor, and our manager called me and said ‘we just got an email, go check your email right now and call them right now’ because they were just starting the first RN-BSN program,” Turbyfill said. “They were doing it like a hybrid so you weren’t having to go to school every day. They were going to pay for ten people to go, covering everything. All you had to do was put your name on a list.”
It was a joyous occasion once the phone call came in from Milligan College’s Jenny Duran.
“I never had someone call and tell me I got accepted to school before,” Turbyfill said. “I was crying on the phone because she was saying ‘I wanted to call you because it was a celebration’ … that was right before we started school so it was around the end of 2014.”
Turbyfill said the past two years was the best experience, talking about the experiences with her instructors and “Miss Jackson,” who Turbyfill added was the “sweetest and most helpful” woman ever on campus.
“When we went to orientation, I came home and told my son that he’s going to have to find something to do at Milligan,” Turbyfill said. “You don’t realize how great of a small school is until you’re there. At the different schools I went to, nobody ever asked for someone to love me extra.”
Friday was a special moment to share with family members too, Turbyfill said, adding that she began to tear up when she saw her son, a sophomore at Elizabethton High School, receive a postcard from his first college.
With a son in high school and a daughter that attends West Side, Turbyfill said she loves living in Elizabethton and sees the similarities between the community and Milligan College.
“It’s the same way,” she said. “Milligan College is just like Elizabethton. Everyone knows everybody and is more than willing to help.”

Star Photo/Curtis CardenMilligan graduated 104 students during Commencement Friday. It all started with a dream from Josephus Hopwood and Henry... read more