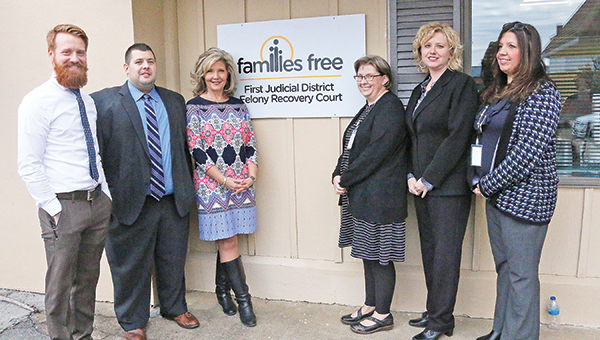 “It is one more arrow we have in the quiver to try to do something besides incarceration.”
Those words uttered by First Judicial District Criminal Court Judge Stacy Street were quickly followed up by a smile as the open house event for the First Judicial District Felony Recovery Court quickly filled up with numerous attendees Thursday evening showing their support for the initiative.
The facility, located at 122C Armed Forces Drive in Elizabethton, is the collective effort of citizens across the state looking to help provide alternatives besides just jail time for felons in the First Judicial District – consisting of Carter, Johnson, Washington and Unicoi counties.
“It’s one more tool that we have now to try to help someone and keep them out of that cycle of going to jail, getting out, then coming back,” Street said. “We hope this program will allow them to have the tools to be a productive member of society. Be able to get a job, balance a checkbook and have opportunities that they normally wouldn’t have.”
Street added that recovery courts have been around for a while now.
“There’s one that was started for misdemeanors in Washington County,” Street said. “Part of the Governor’s Criminal Justice Bill in 2016 provided monies to look for means to provide help other than just incarceration for addicts and to do something about the drug and alcohol problem. (Gov. Bill Haslam) offered very generous grants to anyone looking to do that.”
With the plan in motion, Street and fellow First Judicial District Criminal Court Judge Lisa Rice began looking at ways to bring a recovery court into the District.
“Judge Rice really took the bull by the horns and she looked into it,” Street said. “We went to Sullivan County and looked at Judge (Jim) Goodwin’s court that he has. He started something very similar. We met with the representatives from the Governor’s Office, and we thought this is something we could do here.”
“The difference between us and Sullivan County is they have an inpatient facility. So they come out of jail into their inpatient facility. We have to find a way to get them out of jail and straight into this program,” Street added. ”It’s very important to use that because we represent the four counties of the District that if we can offer something here, we want to offer it in Washington County, Johnson County, Carter County and Unicoi County. We have the Day Reporting in Washington County so we decided to bring the Recovery Court here to Carter County.”
Street added Drug Court was recently held at the courthouse and included one of the first participants for the new program.
The Recovery Court team includes a variety of recovery agencies, judges, law enforcement members, district attorneys and public defenders – some of which were on hand during Thursday’s open house. Along with the local support, State Drug Court Coordinator Liz Ledbetter visited the facility Thursday to show her support for the Recovery Court.
The facility was made possible was a unique partnership with Families Free, a 501(c)3 faith-based community organization operating in Northeast Tennessee that assists with treatment, education, and intervention with citizens.
“The money from the Governor’s Office went to Families Free to help us coordinate the program,” Street said. “They’re providing counselors, aid; they have funding that we wouldn’t ordinarily be able to have like bus passes. They’re establishing the curriculum, what classes are being taught, separating males and females and performing the drug-testing. They’ve been great to work with.”
And as the days move on, it will a busy time inside the Recovery Court as the team looks to service the District.
“It’s not going to save everyone, but it’s just another tool we have to help,” Street said.

Carter County school system officials announced that schools will be closed on Friday, Feb. 17, due to illness. Students and... read more