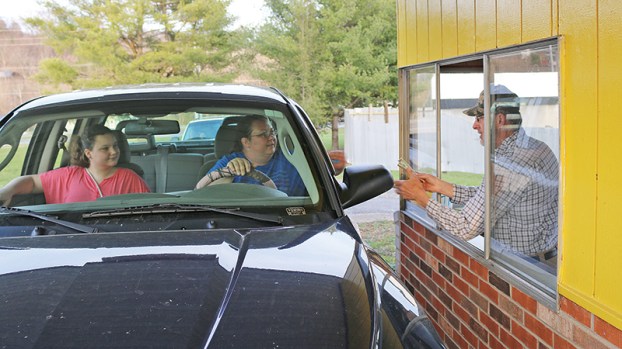 Star Photo/Curtis Carden Katlynn (left) and Brandy Yates were the first in line for Friday. Pictured, the Yates receive their tickets from James Lyons. 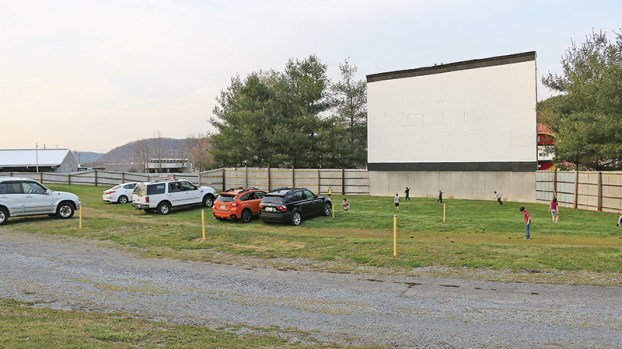 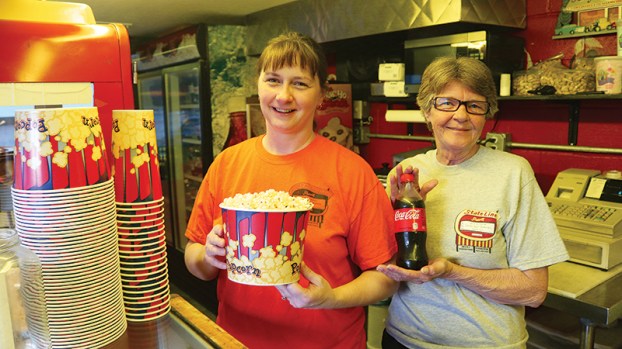 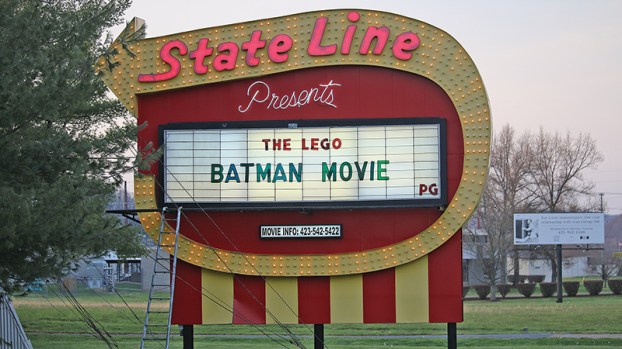 Star Photo/Curtis Carden State Line Drive-In's marquee was gearing up for a busy weekend of entertaining the public.

Looking back, State Line Drive-In owner Andy Wetzel can only smile about the history of one of Elizabethton’s well-known treasures.
Since opening in 1947, the theater has served as a joyful experience for individuals to come out and experience movies in an outdoor setting with friends and loved ones. Being a highly anticipated scene within Northeast Tennessee, the drive-in recently looked at opening up early thanks in part to weather and requests from patrons.
“We opened a little than usually because the weather was nice. We thought we could take advantage of some of that weather but as soon as we opened, it turned out to be pretty nasty, and it ended up snowing on us,” Wetzel said with a laugh.
But the weather did not deter attendees.
“Our first weekend was fair,” Wetzel explained. “The second weekend we actually opted for a double feature. The way the time change was, we were able to pull it off so folks could get home at a decent hour and we had a great time with that.”
Opened Friday through Sunday, the drive is using this weekend as an opportunity to have a movie geared to children.
“This week is our first kids’ movie,” the owner said. “We haven’t done anything necessarily for the kids, yet so we’re doing a kids movie this weekend, the Lego Batman movie. The weather is expected to be pretty nice, so we’re excited to see how things go.”
As excitement grew, there was a possibility the drive-in would cease operations. In 2014, the community rallied together to vote on the theater to receive a new projector – which the State Line won.
“The new projector really brought us out of the dark age,” Wetzel said. “We were running the same projectors that were original to the theater in 1947. They were great pieces of equipment, but they were mechanical. The new stuff is all computer based. It’s given us the opportunity to different things like show DVDs, computer, anything with an output.”
Having the historical significance with the theater is an item Wetzel hopes patrons can enjoy.
“I hope it means that people can get it touch with the past,” Wetzel said about the Drive-In’s history. “We’re fortunate in this region to have two drive-in theaters so close to each other with myself and Bristol, but you look across the United States, and they are still dwindling. There have been some new ones open up, so I think people see there is a possible market out there. I think that comes back to people getting frustrated with indoor theaters. You have much more freedom and at a drive-in and it comes down to the experience.
“There were over 5,000 drive-in theaters in the country during the era of the baby boomers, and now there’s roughly 300 to 350,” he continued. “The baby boomers kids and grandkids haven’t experienced it so we’re getting the baby boomers bring their children with them. Those seeds we’re planting … if they enjoy the experience, they’d want to come back.”
Due to demand from the public, State Line is also looking at expanding their hours into the fall. We’re planning on, if we can, to open a little longer,” Wetzel said. “We’ve had a lot of requests for October. Our goal is to expand our season to see if it works for the folks.”
“If someone wants to come, we’ll play,” he added with a smile.
Show times are scheduled for the weekend, weather pending. Admission prices are $6 for adults and $2 for children 11 years and younger.
For more information about the theater, call (423) 542-5422 or visit the Stateline Drive-In Theater Facebook page online.