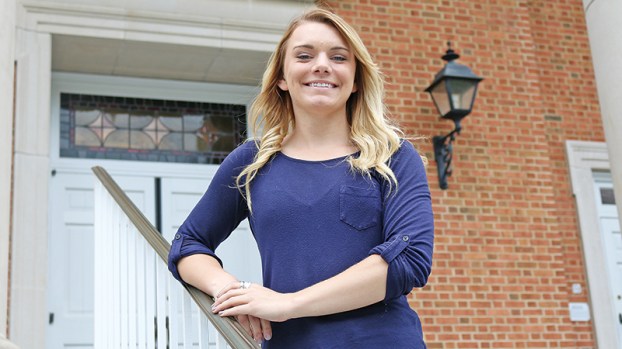 Star Photo/Curtis Carden Hampton native Emily Holtsclaw is one of the hundreds of Milligan College students that will be graduating Saturday.

Sitting in the comfy confines of Sutton Hall will always bring a smile to Emily Holtsclaw.
The Carter County native is one of over 200 students from Milligan College that are scheduled to graduate on Saturday, May 6, in Seeger Chapel and is quick to recall her time at Milligan with a smile.
“It has been great,” she told the Elizabethton Star Thursday afternoon. “I’m definitely excited about graduation.”
Discussing Holtsclaw daily routine sees one word readily tossed around – busy. Even with graduations just a couple of days away, the resident assistant of Sutton Hall worked with other students as they prepared to leave campus for the spring.
It wouldn’t be normal without a project or item occupying her time. Holtsclaw major in Exercise Science and minor in Psychology shows that hard work also comes in the classroom.
But it was a trait she learned early on. The 2013 Hampton High School graduate said her track and field career helped put her into a position to be where she’s at today. Even though Hampton did not field a team, she was able to compete under head coach Matt Estep’s Happy Valley High School track and field program.
“I wasn’t sure about where I would go to school early on,” Holtsclaw said. “But I was able to get a track and field scholarship from Milligan. It seemed like a great fit to continue school and still be able to run. That was very important to me.”
Holtsclaw is part of a world-renown running program, under the guidance of Chris Layne, and said the whole life of being a student-athlete wasn’t easy, but the experience was surely well worth it.
“You learn a lot balancing both,” she said. “It was a great eye opener. It is entirely different than what you’re used to in high school, but it just kept getting better each year. I made so many great friends and learned a lot, both in the classroom and on the track.”
The decision of her major came hand-in-hand with her athletic past, she explained. The Milligan runner added the prestige of the medical programs at the college were second to none and a joy to be around over the past four years.
And something at Milligan must have clicked for the county native.
“Oh I’m coming back,” she said with a laugh, adding she will be heading into the Occupational Therapy program offered across the road on Milligan’s Emmanuel Hill campus.
As the reality of graduation set in, a sense of joy was apparent on the face of Holtsclaw. Along with her Buffalo Pride, Holtsclaw added she was glad that herself, among other county students attending Milligan, were able to respect the school system in a positive way.
“Sometimes you hear bad things about coming from a small school,” she said. “When I first came to Milligan, it was a little nerve-racking.  But then you realize that everyone here is the same. It doesn’t matter where you come from.”
Holtsclaw added she hopes to set a good example for future Hampton graduates looking follow their goals at their dream school.
Milligan Commencement photos from Saturday will be available in the Tuesday print edition of the Elizabethton Star.

“It took a lot of work. Time, and persistence, too. To achieve the important goals. That you set out to... read more