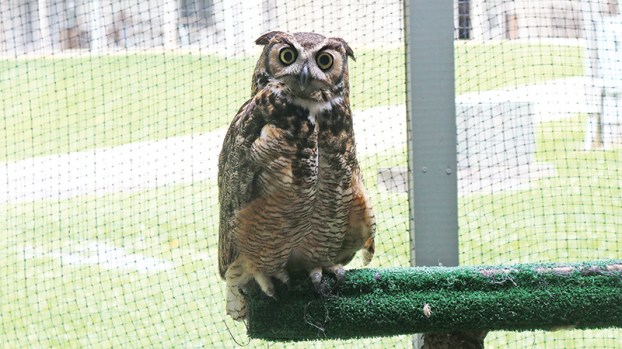 A storied history accompanies the newest addition to Roan Mountain State Park.
Park staff was able to welcome in a Great Horned Owl to their Birds of Prey Aviary home recently. The owl joins Shiloh and “Owl” Capone as the third occupant at the exhibit.
Park Manager J.R. Tinch provided the Elizabethton Star an up close encounter with the new addition Thursday and noted that the animal is a bit different compared to the other two owls.
“Shiloh and ‘Owl’ Capone are both barred owls,” Tinch said. “A Great Horned Owl is one of the largest owls. It’s known as the ‘tiger of the sky’ because of its power.”
The owl, which goes by Sunshine due to the yellow around its eyes, — or Tinch’s favorite “Owl” Pacino — was brought to the facility after suffering an eye and wing injury in West Tennessee.
Tinch added that the park was in the market for a red-tailed hawk but couldn’t pass up the opportunity to have one of the most well-known owls at the facility.
The newest addition is noted as one of the largest and common nocturnal predators in the United States. Great Horned Owls have feathers around the talons and are known to have extreme power when gripping objects.
Each of the owls living at the park are cared and nurtured for by park staff due to their inability to severe in the wild because of injuries. While caring for the animals, the home allows the public to come out and learn more about each creature.
“This has been a great asset for us at the park to be able to interpret and educate the public on a whole other aspect of the park, which is nocturnal wildlife and birds of prey,” Tinch said about the exhibit. “We get a chance to show the public a live bird of prey. You can see pictures and read about them but when you’re able to get up close, see and hear one, it really puts everything in perspective about how wonderful the creatures are we have out here.”
Visitors are encouraged to stop by during regular park hours to visit the inhabits.
“We just ask people to stay behind the fence and don’t peck on the frame,” Tinch said. “They’ll be here for a bit. They’ve been a great addition to the park.
An aviary home is just one of the numerous features that the public can take part in during a visit at Roan Mountain State Park. Tinch added the park staff is gracious for the support from the public and enjoys seeing the growth of the entire Roan Mountain community.
“It has been an incredibly busy summer,” Tinch said with a chuckle. “Each year we always see an increase with people but this year especially, we can definitely see and feel the visitors that have come by. We don’t know if that comes from us getting the No. 1 state park award or if the community is just getting recognized more. We see a lot more people coming to visit Roan Mountain.”
For more information about the park, visit tnstateparks.com/parks/about/roan-mountain online or call (800) 250-8620.

All Aboard to Neyland: Betsy Band wows crowd with performance, news

An orange and black train is ready to rumble through Elizabethton. The defending Division II state champion Betsy Band had... read more