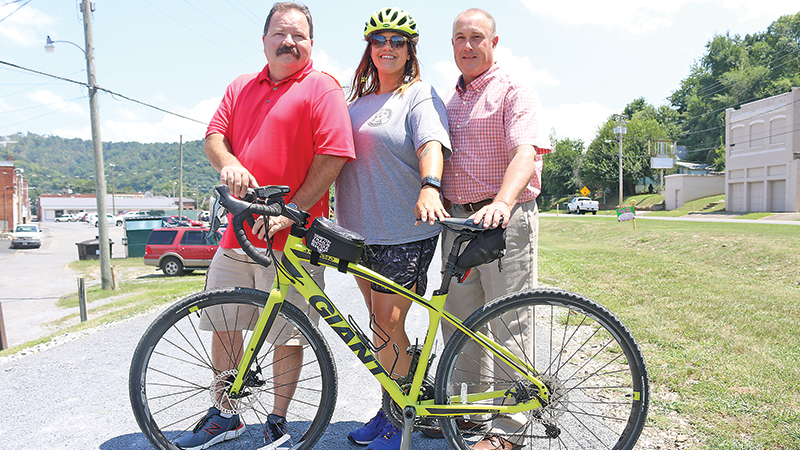 Star Photo/Curtis Carden Elizabethton Parks and Recreation is working to put the final touches on the annual Tweetsie Trail Treasure Trip through the city. Pictured, (from left), David Nanney, Kelly Kitchens and Mike Mains from the department stand on a portion of the trail in downtown.

Carter County’s own treasures will be on full display next month.
Elizabethton Parks and Recreation is in the process of presenting their annual Tweetsie Trail Treasure Trip event and looking to grow off previous years’ success, according to Parks & Rec Director Mike Mains. The event is scheduled to take place Saturday, Sept. 2.
Mains, Recreation Manager David Nanney and Kelly Kitchens were at the trail Friday surveying the landscape and provided an update about what Treasure Trip will have in store for the public compared to past encounters.
“This will be one single event, instead of breaking it up into a morning and evening event,” Kitchens said.
Activities kick off at 10 a.m. and will begin at the section of the trail across from Sycamore Shoals State Park. Participants will travel down the walkway before wrapping up the fun at Covered Bridge Park. Treasure Trip activities last from 10 a.m. to 12:30 p.m. with the remaining events taking place at Covered Bridge Park until 2:30 p.m.
On the trail, members of the public will have a chance to walk throughout Elizabethton and visit five “Golden Depots” that highlight the heritage of the city.
“There’s five depots along the way during the Treasure Trip,” Mains said. “At each depot, there’s a chance to win a grand prize.”
Area businesses, organizations and churches have the opportunity to set up a booth along the designated portion of the trail, free of charge. Different depots that will be highlighted include education, history, recreation, tourism and downtown.
“This is a chance for area businesses and organizations to give back to citizens,” Mains said. “We’ve seen hundreds of people participate each year. We’re hoping by adding different elements, businesses and churches will join with us for the chance to show what they can offer and give back to the community.”
Music, inflatables, a dunk tank, food and grand prizes await the public as they head to Covered Bridge Park.
“Year after year, we want to keep growing this event,” Nanney said. “We’re hoping to see a great turnout for this year.”
Focusing in on what Elizabethton has to offer has been a goal Parks & Rec continually looks to hit and grow on each year.
“Our goal is to take care of our citizens first and foremost,” Mains said. “We also want to draw visitors in and show what Elizabethton has to offer. That’s why we’re focusing on this section of the trail. This gives the public a chance to see the growth downtown, visit the different shops and finish the day at Covered Bridge Park.”
Following the event, Parks & Rec will hold their annual Summer Bash at Franklin Pool on Sunday, Sept. 3, to cap off the season. Music, food, inflatables and other treats will be on site at the facility.
“It’s the perfect way to cap off the season,” Nanney said.
Businesses, churches and other organizations looking to take part in the Tweetsie Trail Treasure Trip can contact Parks & Rec at (423) 547-6441. Updates on events offered by the department can be viewed on the Parks & Rec website and Facebook page.