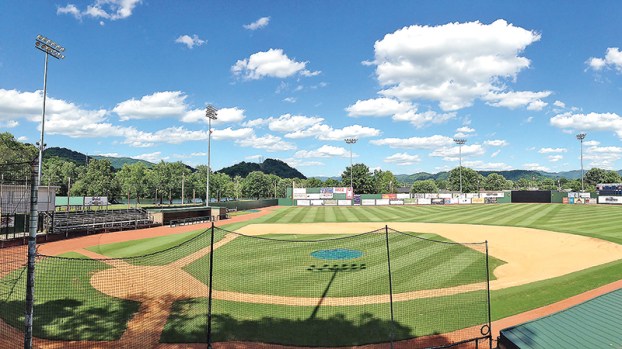 Photo Courtesy of Elizabethton Parks and Recreation The topic of improvements at Joe O'Brien Field will be discussed during Thursday's City Council meeting.

Months of deliberation could soon result in action if plans go accordingly Thursday evening.
Elizabethton City Council will meet in a regularly scheduled session this week to address a plethora of items, including the renovations for Joe O’Brien Field – the home of the Elizabethton Twins Minor League Baseball team.
Councilmen will look at approving a memorandum of understanding (MOU) between the City of Elizabethton and the Minnesota Twins baseball organization. The E-Twins, an affiliate of Minnesota, are coming off their 44th year in the City and recently won the 2017 Appalachian League championship against Pulaski.
The MOU goes into detail following the city’s decision to contribute $1.5 million worth of bond funding to go toward the park – designated as a recreation service.
Funding is designated primarily for clubhouse improvements to have Joe O’Brien in compliance with MiLB regulations. The biggest portion of the project includes a new home clubhouse, estimated at 5,500 square foot and based off designs from Pulaski. Renovations would include:
• Locker room with 38 lockers
• Player bathroom and showers
• Player lounge/classroom with a kitchen area
• Training room
• Video room
• Manager office
• Coaches locker room
• Laundry room
• Storage
Auxiliary Office for visiting Twins staff
Others parts of the project include an additional batting cage near the home clubhouse and the renovation of the existing home clubhouse, which would be used for visiting teams.
According to the MOU, the City of Elizabethton will cover the project costs. Once the project costs are agreed upon by both parties, the Twins will be responsible for “club-directed change orders.”
While the city will handle construction costs, the Twins would furnish equipment for the player development areas of the ball park, i.e., balls, bats, uniforms, training supplies, weight equipment and other materials.
The MOU also features a handful of dates. If passed by the City, both parties will look at having a project plan in place on or before September 25.Then, the parties would then look at having construction start potentially early November but no later than the first week of 2018. Completion of construction, according to the document, is being considered on or before May 15, 2018.
Another topic up for discussion Thursday includes an amendment to the contract in place with Thomas Weems Architect to design the improvements. Richard Barker, Twins Task Force member, covered $28,000 to help with costs. But due to unforeseen circumstances, Weems reportedly is asking for an amendment to the initial contract due to the need of additional surveying and civil engineering.
According to the MOU, the Club would finance certain pre-construction design services to assist in the drawings for the project, not to exceed $10,000.
The city is also looking to see the Twins continue their 40-plus year stay at Joe O’Brien Field.
A portion of the document read, “subject to achievement of the milestone date for substantial completion; the Club will commit to having the Elizabethton Twins play all of its home games at the ballpark by entering into a management agreement with provisions consistent with the Club’s existing arrangement with the City.”
The initial term would be five years following the completion of the project with two options to renew for an additional five-year period. If the Appalachian League is eliminated by the National Association, the management agreement would cease to exist.
Thursday’s decision will be just days after the announcement that the Houston Astros organization is pulling their resources from Pioneer Park, effectively nixing their MiLB team’s affiliation from Greeneville.
Discussion and action on the MOU will be discussed during Thursday’s meeting, scheduled to take place at 6 p.m. in Council Chambers at City Hall.

For one night, stress and doubt were traded in for the hope of a new tomorrow. Multiple community organizations and... read more