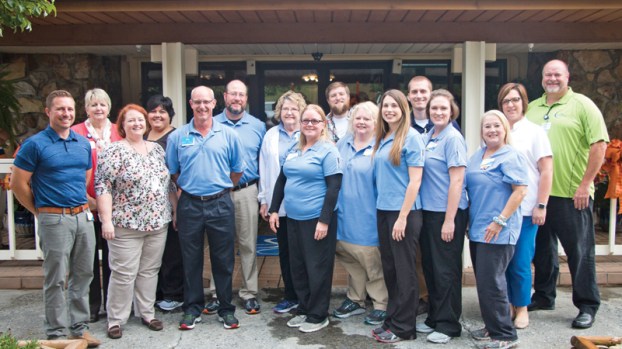 Star Photo/Curtis Carden Staff at Signature Healthcare of Elizabethton were recognized by coorporate officials for taking home the top honor of a recent competition that featured over 120 homes.

Out of 130 rehabilitation departments across the country, one local center reigned supreme.
Signature HealthCare of Elizabethton Rehab & Wellness Center were recognized by their corporate office Tuesday for their in instituting a program to assist residents that experience short stays in the facility.
According to Terry Clay, vice president of Signature HealthCare, 137 Signature Rehab departments across the country competed in a contest to unveil a program that will be used at centers. Over 60 facilities completed projects with Signature HealthCare of Elizabethton being recognized for their “Homeward Bound Safe & Safe” initiative.
“It’s a major accomplishment for this team to come together use their resources for a program that will be used at centers across the country,” Clay said. “We’re extremely proud of their effort.”
During Tuesday’s ceremony, which included a party for staff and residents, VP of Clinical Services Christine Busby credited the innovative methods put in place by the facility.
“We were impressed with the program,” she said. “It was extremely creative. They don’t have the biggest rehab gym but were able to use what they had in such a way that will be a benefit to residents.”
Tuesday’s celebration was the culmination of hard work from everyone at the facility, from occupational therapy, physical therapy, to nursing and administration, according to Rehab Services Manager Cole Harmon, OTR/L.
While using the resources that have already been circulating at the facility, Harmon explained staffed broke down “Homeward Bound Safe & Sound” into different concepts.
“The program is focusing on preparing residents, who only stay for a short term, to have a safe and productive stay at home,” Harmon said. “We already have the toolkits in place to address the population that have long-term stays in facilities.”
Different sections of the new program including cooking, laundry, money management, medication management and transportation.
“We sat down and compiled a program of items we’ve already been access to utilize them more cooperatively,” Harmon said.
With the program ready to roll, Harmon stated that staff will host a webinar in the near future for other facilities to begin the training process of implementing the program at Signature HealthCARE facilities across the country.
And the hard work is nothing out of the ordinary for the staff in Elizabethton, according to Clay.
“I’ve been visiting the facility over the past 12 years,” he said. “It’s an incredible atmosphere. It’s so welcoming, and that’s the way we want our facilities to be. The staff does an amazing job.”
Busby added she had some entertaining conversations with residents during the celebration and also commended the effort of employees.