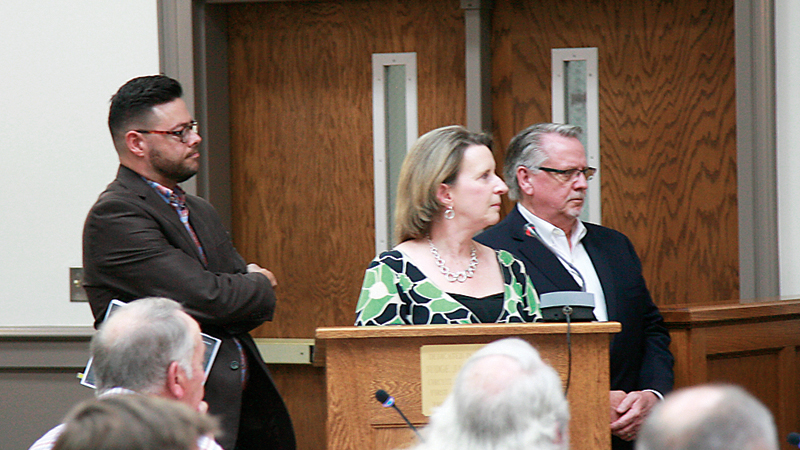 Star Photo/Abby Morris-Frye Members of the Design Sensory Team present their research findings from tourism study to members of the Carter County Commission.

Branding, a unified effort, better promotion, and helping visitors find the things they are looking for were the top recommendations from an agency contracted to conduct a tourism asset study and action plan.

Earlier this year Carter County was awarded a grant from the state of Tennessee to perform an asset inventory and develop an action plan for the purpose of promoting tourism. Design Sensory was contracted to perform the study and develop the plan and on Monday evening they presented their findings to the Carter County Commission.

During the process, members of the Design Sensory team traveled to Carter County several times, met with residents and stakeholders, hosted a town hall meeting, and visited some of the popular spots in the community.

“We’ve truly fallen in love with Carter County,” said project manager Mary Blair. “You are so blessed to have things in this county that can’t be built.”

In their study, Blair said Carter County has many assets in the outdoors and nature category as well as the history and heritage area, which she said are “two of the biggest tourism drivers.”

What the county needs to do to take advantage of those assets is to promote those assets better through consistent branding and a unified effort.

She shared an example of something she herself learned while visiting Carter County for the project. Prior to working on the project, Blair said she had never heard the history of the Watauga Association and their formation of the first democratic government independent of the British crown in America.

“I’m from Blount County. I’m from East Tennessee and I didn’t know that,” she said. “No other place in Tennessee or in the United States can claim the birthplace of liberty that Carter County can.”

Chris Wise, another member of the Design Sensory team also discussed his visits to Carter County and shared a photograph of he and his wife when they spent time on the Tweetsie Trail.

“I would say the biggest asset you have is people who are welcoming,” Wise said.

In a survey completed by local residents and visitors, Blair said the results showed that 84.8 percent of those surveyed believed that Carter County has yet to reach its full potential where tourism is concerned.

Blair said she and the Design Sensory team are proud to be part of the effort to help the county reach its full potential by acting on the findings of their study.