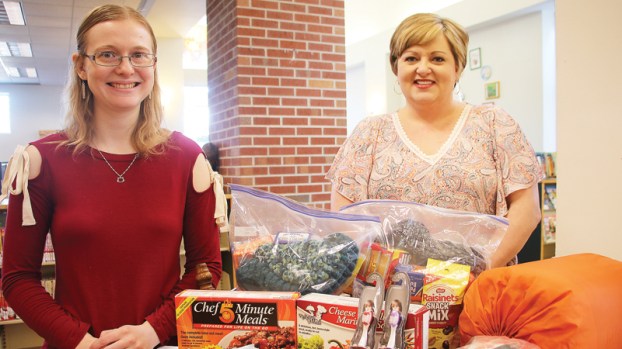 Star Photo/Curtis Carden The U.S. Housing and Urban Development (HUD) Homeless Count will take place this week. Volunteers from the area will look to assist those in need and locate different homeless individuals in the area. Information will be provided to HUD, which in-turn could provide funding to assist the issue. Pictured, Bekah Dugger with the public library and Carmen Johnson with Hand-of-Hope pose with some of the items that will be provided to individuals deemed as "homeless".

Across Northeast Tennessee, public servants are doing their part to help raise awareness for those in need.

Volunteers in Carter County are using the Elizabethton/Carter County Public Library as a base of operations Wednesday as work gets underway for the annual 24-Hour Point in Time Homeless Count offered by Appalachian Regional Coalition of Homelessness (ARCH) to document the amount of homeless individuals within the region.

The initiative serves as a way to provide a snapshot into an issue that allows for potential grant funding by the U.S. Department of Housing and Urban Development (HUD) for housing and support services for the homeless.

But the issue isn’t as cut and dried as believed. Parameters used by HUD to determine if someone is “homeless” are specific. According to the HUD website, there are four federally-defined categories which families might qualify as homeless.

• Homeless under other federal statutes

The issue of homelessness ramped up months ago following a social media push by residents looking to help individuals who were struggling during cold weather. To help make an impact, Bekah Dugger with the public library encourages residents to contact the library and make them aware of where homeless individuals may be, so that they can be counted by volunteers involved with the initiative.

“We ask that anybody who may know of someone who may be homeless, stop by and let us know their last-known location,” Dugger said.

Multiple organizations lend a helping hand during the course of the count. During the day, volunteers from groups, such as Red Legacy, take to the streets to find individuals who are homeless.

“It it very important for us to participate in this,” Dugger said. “Carter County is such a big area, and it’s hard to find everyone. Having groups like Red Legacy, Hand-of-Hope, it makes it possible for us to find as many people as possible to make sure they’re accounted for. This is an opportunity for us to potentially receive funding to help with the issue of homelessness.”

Patrons and different organizations have already provided items that will be provided to homeless individuals, including Hand-of-Hope, which is based out of Johnson City.

“Hand-of-Hope recently reached out to Elizabethton and Carter County churches and other nonprofits during the ‘Come to the Table’ event at First Methodist Church,” Johnson said. “This is Hand-of-Hope’s first installment on a commitment made to assist locally in meeting the needs of the homeless and those in need. The more we can raise in donations, the more we can leverage and provide hot meals to those in need.”

Residents can also donate items to assist with those in need.

ARCH also encourages individuals that have not taken part in a survey or anybody that knows of a homeless situation to call the ARCH Care line (1-888-989-2273).

While the campaign to “Start the Bus” fell short of the goal mark, the Boys & Girls Club of Elizabethton/Carter... read more