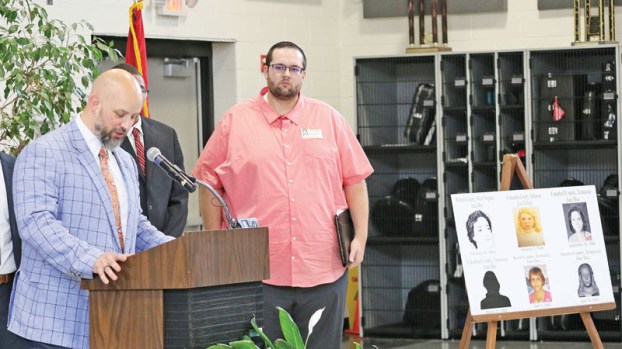 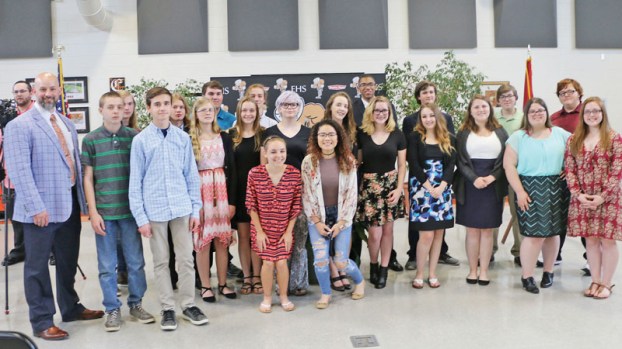 Tasked with rethinking the high school experience, Elizabethton High School sociology students are taking things to the next level by hoping to break open a near 40-year-old murder case.

Alex Campbell’s spring sociology class held a press conference Tuesday afternoon, joined by law enforcement agencies from Carter County, Elizabethton and the state of Kentucky, to present their eight-page profile about the little-known “Redhead murders” that spanned surrounding states, with the closest reported case tied in with the murders happening in Greene County.

Over the course of the semester, students were able to delve into the cases, which reportedly took place between October 1978 through 2001 in Tennessee, Arkansas, Kentucky, Mississippi and Pennsylvania.

Through a course of expansive research and utilizing tools from area law enforcement, DoeNetwork, and Todd Matthews with the Justice Department, students were able to link six cases together that fell in within the murderer’s motive, that fell between 1978 to 1985. Working alongside professionals, students were able to gather information on five Jane Does and one individual, Lisa Nichols, 28, who followed within their timeline of the murders. They estimated six to 11 victims were involved in the series of murders. Students were able to dub the suspect in question the “Bible Belt Stranger” due to the nature of the murders and its proximity within the region.

By using the information from the five Jane Does and Nichols, students were able to draw similarities from the victims, including their gender (female), age (between 17-45 years old), weight, and each victim having red hair.

The background information on the victims researched include:

• The body of a white female was discovered on Route 250 near Littleton West Virginia in 1983.

• The body of another victim was found near Jellico, Tennessee in Campbell County near Interstate 75 in 1985

• A skeletonized body of a red-haired female was located in Pleasant View in Cheatham County, Tennessee, near Interstate 24.

• A victim in Greene County was discovered in Greeneville, Tennessee on April 14, 1985.

• The body of a white female was discovered in a white Admiral refrigerator in Gray, Kentucky, on April 1, 1985.

Trooper Shane Jacobs, with Kentucky State Police, stated during Thursday’s event that their department is close to identifying the subject in regards to the Kentucky case and thanked the students and individuals on social media for being active in the case.

Students were able to highlight other victims part of the murders but that the six murders in question fit the MO and signature of one killer, giving them basis of dubbing the potential suspect as the “Bible Belt Strangler”.

“We believe his is still alive and living in the Knoxville area,” Campbell said.

In the profile created by students, they were able to find out the subject is a male, born no later than 1962 but no earlier than 1936, with a height between 5’9’’ and 6’2’’ and weight between 180-270 lbs. The profile estimates that the individual worked as a truck driver and lives near the Knoxville area due to the trend of the six murders taking place on the I-40 corridor or along I-75 and I-81. Other profiles highlighted include the subject having an above average IQ,  being right-handed, coming from an unstable home, being able to have emotional relationship with others, and having the motive of being a mission-oriented killer, due to the deaths caused by suffocation.

Work from students was recently highlighted on the Out of the Shadows podcast, hosted by Shane Waters.

Waters and Gemma Hoskins, from the Netflix series “The Keepers”, recently spoke with Campbell’s class to learn about the information they were able to come up with.

Hoping to breathe life into cold cases, Waters said he was excited to hear from the students and that Tuesday’s event gives hope and closure for families.

“We’re all very passionate about this,” he said. “Hopefully people will hear this and become passionate and start talking about it.”

Referring back to the Kentucky case, EHS student Aubrey Toncray read a letter provided by a woman named Elizabeth, who believes she is the daughter of the Gray, Ky., victim.

In the letter, Elizabeth, 34, spoke about not giving up hope but that she “didn’t think (she) would live to see this day, or to even be part of this unraveling story”.

And this isn’t the first time students have worked with helping with a case. Previously working with the Carter County Sheriff’s Office, Sheriff Dexter Lunceford was on hand for the event and praised the efforts of the students.

“It’s pretty incredible,” he said about the work performed by students.

The public can visit ecschools.net to view the profile in its entirety. Individuals with information on the murders are encouraged to contact the Tennessee Bureau of Investigation by calling 1-800-TBI-FIND.