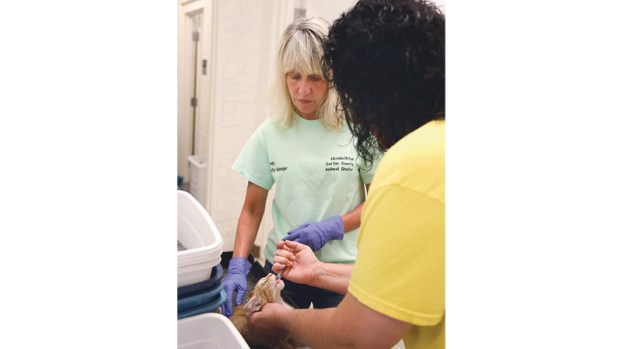 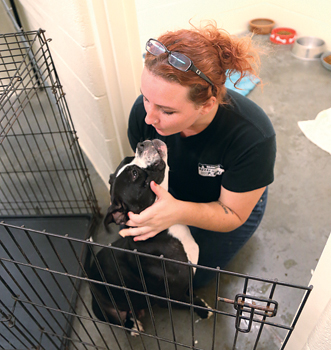 Star Photo/Abby Morris-Frye Volunteer Ericka Gamble shows some affection to a dog at the animal shelter before she begins work cleaning the dog's cage.

For over a month the Elizabethton/Carter County Animal Shelter has been over capacity, and local officials do not see any relief in sight as animals continue to be dropped off and abandoned.

According to Animal Shelter Director Shannon Posada, the official capacity of the shelter is 80 cats and about 30 dogs. On Wednesday morning the shelter was home to 180 cats and 43 dogs.

This summer, the shelter has been inundated with cats and kittens as well as numerous litters of puppies, Posada said.

With so many animals already calling the shelter home, Posada said the shelter is only accepting new animals in emergency cases, and regular intakes have been suspended.

Even with the suspension in place, Posada said that had not stopped people from bringing pets to the shelter. However, she said individuals are now abandoning them after hours.

“People are setting them out at the fence and leaving them,” Posada said.

One litter of kittens were rescued by a good Samaritan and brought to the shelter after someone attempted to kill them, Posada said.

In that case, an individual placed a litter of kittens into a pet carrier and then threw the carrier off a bridge and into the river.

“A lady was going by and saw it,” Posada said. “She went down and got them out of the river and called animal control.”

The animal control officer brought the nearly drowned kittens to the shelter. Posada said the little animals were soaking wet when they arrived and are now receiving medical care.

According to Posada the only thing that will provide a long-term solution to overcrowding at the shelter is educating the public about the importance of spaying or neutering their pets.

“We have people who receive a voucher to have their animal spayed or neutered, and they still don’t do it,” Posada said. “Then they call us wanting us to take another litter because the animal is pregnant again.”

With so many mouths to feed and animals to care for, Posada said the shelter is desperate for volunteers and pet foster parents to assist staff in taking care of the animals.

“We encourage people to get involved in our shelter,” Posada said. “We welcome all volunteers, and we need people who will foster some of our animals.”

Posada said the shelter staff interview potential fosters and do home checks to make sure they have the proper environment to care for the animals. The shelter also covers any necessary medical care for any animal that is a foster pet until the time the animal is adopted out.