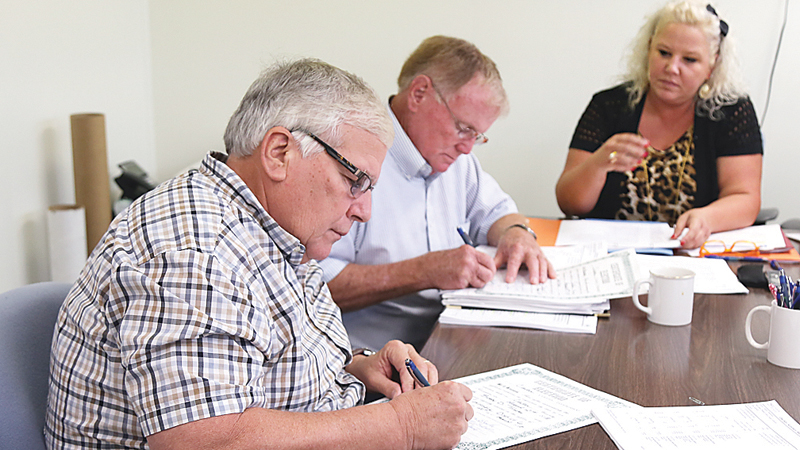 Star Photo/Abby Morris-Frye Members of the Carter County Election Commission Ramon Sanchez-Vinas, left, and Paul Souder, second from left, sign Certificate of Election forms on Monday morning as they certified the results of the August General and Primary elections.

With the August election now behind them, members of the Carter County Election Commission reviewed that election before turning their eyes toward November during the group’s meeting Monday morning.

The principal order of business for the Election Commission on Monday was certifying the results from the August 2 election and signing the official Certificate of Elections forms for elected county officials whose terms will begin on Sept. 1.

The Election Commission also voted to certify the field of candidates who qualified in upcoming city elections for Elizabethton and Watauga.

In addition to certifying the results, members of the Election Commission also discussed some issues encountered during the recent election including problems with voting machines at different precincts and a complaint received from two voters regarding a poll worker at a precinct on Election Day.

“We had a few glitches when the election first started,” Election Commission Chairman Doug Buckles said.

Early in the day on August 2 when the precincts were opening several precincts called in to report problems with machines not turning on and electronic cards not working correctly. The Election Office sent staff members, machine technicians and even members of the Election Commission to different precincts to try to resolve the issues, many of which were easily corrected. One machine in the Range precinct was shut down early due to technical difficulties with the machine.

“I am going to order about 20 extra cords for the machines,” Administrator of Elections Tracy Harris said. “It’s easy to get shorts in those little tiny cords.”

One suggestion Harris made to the Election Commission is to hire more machine technicians to work on Election Day to improve response time to precincts reporting issues.

The Election Commission directed Harris to speak with the current machine technicians to get recommendations for two more individuals to serve as technicians and then bring those names back before the Commission to be appointed.

During Monday’s meeting, Harris also provided commissioners with copies of emails between herself and a couple of voters from the Roan Mountain precinct who had filed complaints regarding a poll worker at that location. Both of the voters said they wished to vote in the Democratic Primary, but the poll worker told them the election was only Republican Primary and signed them in as voting in the Republican Primary.

Harris said she had spoken to the poll worker in question and the individual said they did not remember making that statement to anyone. She explained poll workers are not supposed to make those type of comments to voters, and if anyone asks questions about candidates or specific election races the poll workers are only supposed to say “The ballot speaks for itself.” She said the state sets that policy.

“If this happened to two people in one day, I think it would be a good idea not to use them again, but that will be up to you,” Harris told the Election Commission.

Buckles and other commissioners said they would consider the complaint as well as the status of the worker in question during the Commission’s meeting in September when they will appoint poll workers for the November election.

Several members of the Election Commission spoke about a traffic hazard created by campaign workers lining the sidewalks on Holston Avenue and East G Street during early voting.

“People were gathering up on that corner, and that’s a traffic hazard,” Commissioner Paul Souder said, adding the political signs along the road also created a problem with traffic hazards.

The Election Commission voted unanimously to go before the Elizabethton City Council and request that the city begin enforcing the political sign ordinance around the Election Office during early voting periods to help eliminate the problems. Buckles asked Harris to see about getting the Election Commission on the agenda of the next Council meeting so they could make their case before early voting starts in October.

Lee stops by Elizabethton on ‘Believe In Tennessee Tour’