BOE to hold legal session over ‘In God We Trust’ law 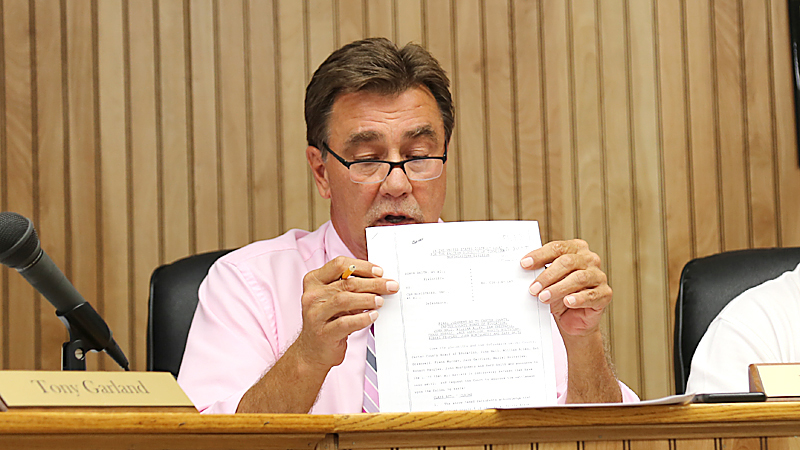 Star Photo/Abby Morris-Frye Carter County Director of Schools Dr. Kevin Ward holds up a copy of a federal court injunction against the school system from allowing or encouraging religious activities on campus during school hours.

As the Carter County School System continues to look for a solution to legal jeopardy that has arisen placing the system between following a state law and complying with a federal court injunction, members of the Carter County Board of Education will meet in a closed session this week with their attorney to explore their options.

The Carter County Board of Education has called a special legal session with the Board’s attorney John Banks to discuss displaying the national motto “In God We Trust” inside the county’s schools.

A state law that took effect earlier this year requires all public schools in the state to prominently display the national motto “In God We Trust” inside an area of the school where students are likely to see, such as an entrance, cafeteria or another common area.

The Carter County School System has held off on posting the motto on the legal advice of two attorneys due to a 30-year federal class-action lawsuit against the school system which resulted in a federal injunction being issued by the court against the system.

The school system’s attorney John Banks was one of two attorneys who represented the school system when the lawsuit was initially filed and settled in 1988.

A group of local residents brought the federal suit against the county as a result of those religious instruction sessions. The plaintiffs in the case were successful. CBM Ministries, the Carter County Board of Education, and the sitting Board members at that time reached a settlement agreement in the matter, which was then approved by the federal court.

As part of the settlement, the defendants in the case — CBM Ministries and the Carter County Board of Education — had to pay the plaintiffs “an undisclosed amount of money as damages, attorneys fees, and costs” and the amount of the settlement was made subject to a nondisclosure agreement between all the parties.

In light of that injunction issued by the federal court, Director of Schools Dr. Kevin Ward said both Banks and a state attorney in Nashville advised the school system not to display “In God We Trust” in the schools until they can get the matter addressed in federal court.

“It very well could be, and probably is, a violation of the injunction,” Ward said of displaying the motto.

The matter will hinge on whether the federal court interprets displaying the words “In God We Trust” as the school system “allowing, approving, or encouraging religious activities” which is expressly prohibited by the injunction.

“We are looking at 30 years this permanent injunction has been in place,” Ward said.

Under the terms of the injunction, the order continues permanently despite changes in school system leadership or to members of the Board of Education.

“It would put this Board, and myself, in legal jeopardy,” Ward said of posting the motto as directed by state law.

The Board will meet with Banks in a closed legal session on Thursday, Aug. 23, at 4 p.m. at the school system’s administration building on Academy Street.

Board of Education Chairman Rusty Barnett said the Board could schedule a special called meeting if the Board needs to take action following their discussions with the attorney.

Following the legal session, the Board will host a workshop to begin discussing the process for searching for Ward’s successor as Director of Schools. Earlier this month, Ward announced he will retire from the position at the end of this school year.