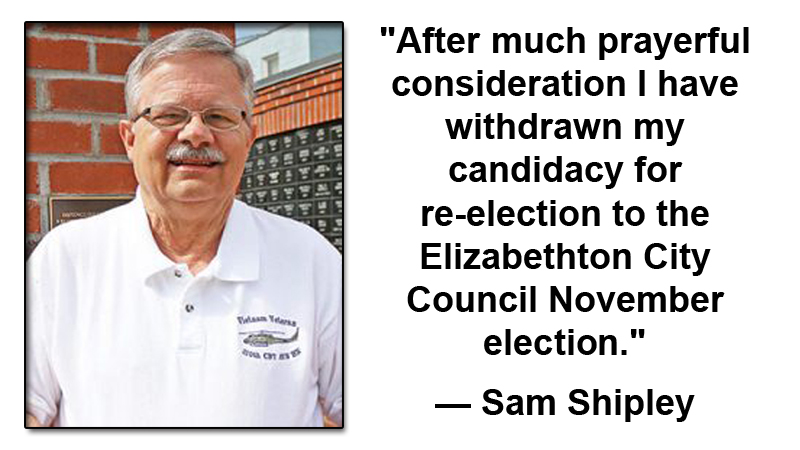 An incumbent with the Elizabethton City Council who had previously filed paperwork seeking re-election has now withdrawn his name from the race.

On Wednesday morning, Sam Shipley completed a withdrawal notice at the Carter County Election Commission asking the Commission to take his name off the November 6 ballot. Shipley previously qualified as a candidate for re-election on July 12.

Shipley told the STAR the decision was a difficult one to make, but he felt it was necessary.

“After much prayerful consideration I have withdrawn my candidacy for re-election to the Elizabethton City Council November election,” Shipley said. “Earlier this year I was diagnosed with prostate cancer and had surgery in February. I feel it is time for me to focus on my health and spend more time with my family.”

Shipley has served on the City Council for two decades and through his service on the Council has also been on several other Boards and Committees representing the city’s citizens.

“It has been an honor to have served on the Council these past twenty years. I am proud of the accomplishments made in the city during my tenure,” Shipley said. “I wish the new council that will be elected in November the best. It would have been a pleasure to have served with all that are running.

“I appreciate the support that the citizens of Elizabethton, city employees, and fellow city councilmen have shown me over the years,” he continued.

Shipley is one of four current members of the Elizabethton City Council whose terms of office are expiring. The other three incumbents are Bill Carter, Wes Frazier, and Richard Tester, all of whom have qualified as candidates for re-election.

With Shipley’s withdrawal from the race, there are now five candidates competing for four seats on the Council. Joining Carter, Frazier, and Tester on the ballot will be Richard Barker and Michael Simerly.