BOE continues to explore options in face of federal injunction 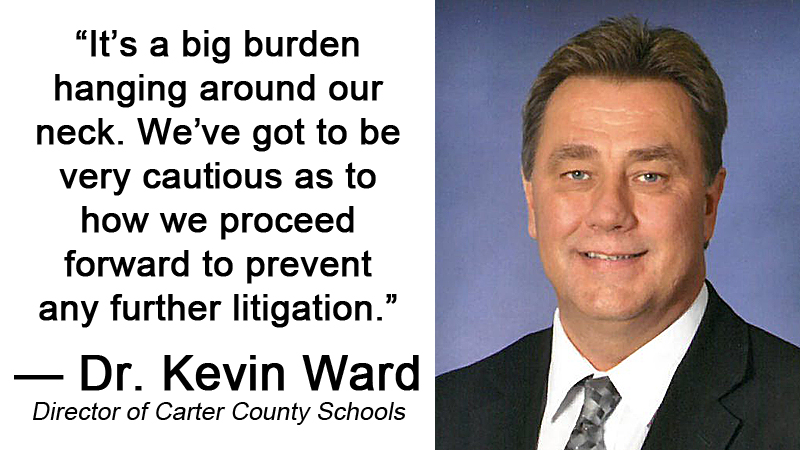 “We’re stuck between a rock and a hard place.”

Those were the words Carter County Director of Schools Dr. Kevin Ward used to describe the situation the Carter County School System finds itself in as they try to navigate the waters between a state law and a federal court injunction.

Members of the Carter County Board of Education met Thursday afternoon in a closed legal session with Board attorney John Banks to discuss the legal questions surrounding a state law requiring schools to publicly display the national motto “In God We Trust” and the 30-year-old federal court injunction barring the system from encouraging or allowing religious activities on school campus during school hours.

“The best thing that we can say right now is we have had the opportunity to sit down as a Board with our attorney and we are continuing to explore our options,” Ward told the Elizabethton Star following the closed legal session on Thursday. “This court order, as has been well documented, has been on the books for 30 years now.

“It’s a big burden hanging around our neck,” Ward continued. “We’ve got to be very cautious as to how we proceed forward to prevent any further litigation.”

The federal court injunction was issued by U.S. District Judge Thomas Hull in 1988 after the school system lost a federal class-action lawsuit brought by local residents alleging the school system violated the First Amendment rights of students by allowing and encouraging religious activities on campus during school hours.

“It is ordered that a permanent injunction should issue perpetually enjoining, restraining, and prohibiting the above named defendants in their official capacities and their successors, agents, and employees from allowing, approving or encouraging religious activities in the public schools for Carter County, Tennessee during public school hours,” the order signed by Hull states.

Ward said the school system is working with their attorney as well as state attorneys in Nashville to find the best course of action for the school system. According to Ward, the Board and the school system want to comply with the state law and prominently display the motto “In God We Trust” but first they must make sure doing so would not violate the federal court injunction.

“What everybody has to realize and understand is any kind of federal court order or federal injunction will supersede what the state says,” Ward said.

Ward said the new state law requiring the motto to be displayed did not include any repercussions for school systems who do not comply with the law, but he added the school system must consider what consequences may come if the federal court rules they violated the injunction.

“If we violate the federal injunction there would probably be additional court action and additional litigation and the possible loss of federal funds,” Ward said. Federal funds support several school system programs such as the school meal program, special education, and Headstart programs.

Ward said he and Banks have been in communication with various state officials and legislators to explore the options open to them and to keep state officials informed of the situation.

On the homefront, Ward said the school system has seen a positive response from local residents regarding the issue.

“We’ve had very, very good support from the community. You wouldn’t believe the phone calls of support I’ve received, and I appreciate it,” Ward said. “Our Board members have received phone calls and they appreciate the support that we are getting.”

“When it comes to the legal status which we are in right now with this court order we’ve got to be very careful as we move forward,” Ward said.