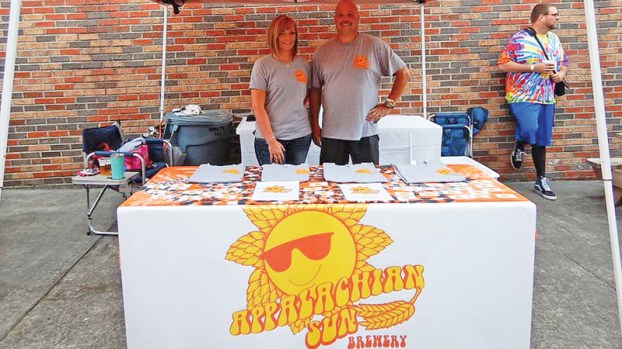 Photo Contributed James and Traci Kerr with Appalachian Sun Brewery will be one of the vendors on site for the inagurual Betsy Crafts & Drafts this weekend.

A new festival is expected to see hundreds make their way to Joe O’Brien Field this weekend.

Organizers with Go BETSY! are putting the final touches on the inaugural Betsy Crafts & Drafts Festival, set to take place this weekend — Oct. 13-14 — from noon to 5 p.m. at the home of the Elizabethton Twins and Elizabethton High School Cyclones baseball team.

Chris Little, with Go BETSY! also announced that the crafts portion of the event is now free to the general public thanks in part to the event sponsors — the Elizabethton Star, Grindstaff and Modern Woodmen.

On Oct. 13, attendees will be able to take part in the “drafts” portion of the event. Little stated that over 30 craft beers from 15 breweries will be available.

“All beers have won in regional competitions,” Little added.

Prices for the “drafts” portion include a five-beer flight for $25 or single drafts for $6. The public can visit www.gobetsy.ticketleap.com to purchase tickets for the event.

One part of the event that features a local tie-in is Appalachian Sun Brewery. Operated by James Kerr and his wife, Traci, the new brewery is on the horizon for the city and will soon set up shop in the region.

James recently announced via Facebook that the brewery’s original location, nestled behind Amigo’s, will be a no good but that the business is in the process of finding a new place in the Elizabethton-Carter County area. While the business cannot yet sell beer, due to them going through the permitting process through the state, they will be at the event providing samples to the general public.

Along with the drafts, Little added that over 40 craft vendors will be at the festival to sell their handcrafted items. Other activities going on at the facility include inflatables, axe throwing, music, an escape room and a food court with local restaurants in attendance.

To learn more about the event itself, be sure to visit the Betsy Crafts and Drafts Facebook page online.

The purpose of the event is to raise funds for various projects throughout the community. Organizers with Go BETSY! are also involved with the Elizabethton IDEAS Group, a grassroots group that has helped spearhead various projects within the community. A handful of events the group helped lead includes the creation of the Green Bridge Park area across from Hampton High School, utilizing Appalachian State University to create a masterplan for Covered Bridge Park and looking at the possibility of having a whitewater park in the community.

Little added all proceeds will go to benefit nonprofit groups and other ideas going on to help ensure their projects receive necessary funding. The organizer added he hopes the group can continue to be an asset to the city and county.