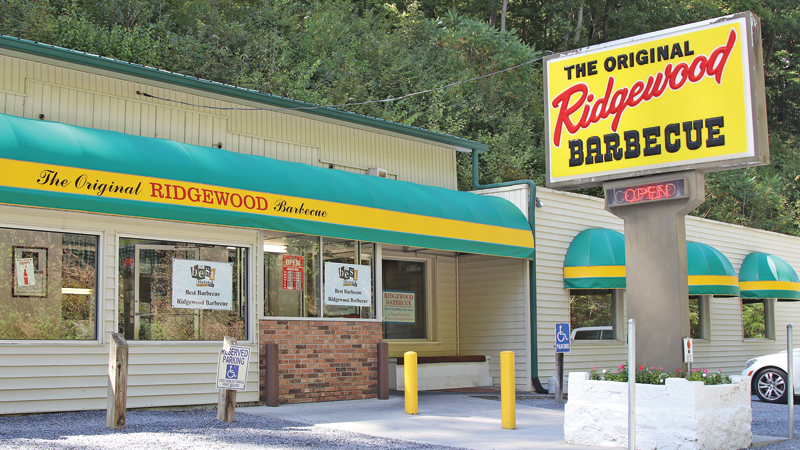 Star Photo/Curtis Carden Ridgewood Barbecue is currently celebrating its 70th anniversary of operation. The resturant is located in Bluff City near Elizabethton.

estled right on the outskirts of Bluff City, one barbecue restaurant with Carter County ties continues to keep its national allure going alive and well.

Created in the late 1940s, Ridgewood Barbecue is currently celebrating its 70th year of operation and continues to be recognized as one of the nation’s most heralded barbecue establishments.

It’s been a delight to see the progress over the years, according to manager Ray Harrington.

“I’ve been here for over 15 years,” Harrington said. “I’ve grown up in this and I really enjoy it. It is great to talk with the customers, especially the new ones you’ve never seen before. It makes you feel good knowing that people are able to stop by and enjoy themselves.”

Steeped in tradition, Ridgewood is currently handled by Lisa Proffitt Peters, a third-generation owner of the establishment. The restaurant was passed down from her father, Larry Proffitt.

Even though the restaurant has garnered such a prestigious background, Harrington said it is nice to see people from all across the area talking about Ridgewood.

“It’s tremendous,” he said. “Whenever I go somewhere, I’ll have people call me the Ridgewood man because they’ve seen me here. It’s like Saturday, I was at the (Tennessee Vols football) game and people were coming up to me saying they remembered me from Ridgewood.”

Various items line the inside of the restaurant showing the historical significance of the building, including a handful of autographed items from celebrates. Right behind the cash register is an autographed photo of Elizabethton native and former NFL tight end Jason Witten.

MEATS, AND OTHER GOOD EATS

You don’t develop a national reputation without an extensive list of menu items for sale.

During each week, patrons frequent the restaurants to take in a bevy of food items with the most notable being barbecue pork or barbecue beef which is seasoned by the Ridgewood-style barbecue sauce, a Proffitt family recipe.

But don’t think Ridgewood is necessarily a one-trick pony.

To go along with the barbecue treats, the menu also features chicken, ham, shrimp, oysters, catfish and hamburgers. Other side goodies include homemade slaw, barbecue beans, french fries, and other treats.

Harrington added one of the restaurant’s popular dishes is the blue cheese bowl, which has been known to reel people in from all over the Southeast.

A TRIP DOWN MEMORY LANE

Ridgewood first started in 1948 thanks in part to the idea of Grace and Jim Proffitt. Developing mountain-style barbecue was the name of the game, and the family knew the business could make a serious impact within the region.

The business made its move to the second generation to Larry, owner of Burgie Drugs. Over the years, Larry was quick to serve the restaurants of Elizabethton before making his way across the county line to handle business in Bluff City. Larry would then pass along the business to his daughter to keep Ridgewood family owned and operated.

The history of the business even spurred the creation of a book, “The Proffitts of Ridgewood: An Appalachian Family’s Life in Barbecue,” which was written by Fred Sauceman and goes over the history of the restaurant.