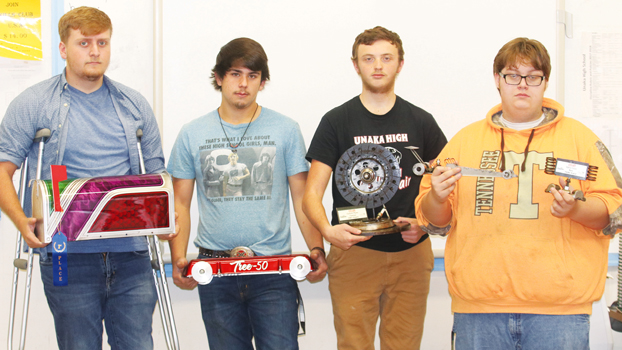 Star Photo/Andrew Wadovick Students at Unaka High School won first place in the Custom Paint contest and third in the Valve Cover race. This was the team's first time competing, and they competed against almost 600 other students in East Tennessee.

A small school with a new team, the students at Unaka High School said they were just excited to be there. When they won first and third place in several categories, however, beating out hundreds of other schools, they said they knew they were going places.

He said this was Unaka’s first year competing in the Top Wrench competition.

Despite this, the team won first place in the custom paint contest and third in the valve cover race.

For the former, students had to design and paint a mailbox to submit to the judges. Several different designs adorn the mailbox, including an orange hexagon design and green flower petals.

“The judges could not believe the students actually did them,” Johnson said.

Top Wrench featured almost 600 students from across the East Tennessee area. According to the competition’s website, Top Wrench has hosted the contests for 28 years.

“Many of these schools have been participating in this for almost 12 years,” he said. “This was our first time competing.”

In addition to the mailbox, the group also submitted a valve cover “car” that raced along a sloped track similar to a pinewood derby car. Out of the assortment of valve cover cars that raced, the group said theirs was one of the few that was painted, meant to help it stand out from the rest.

Johnson said the students were nervous at first, competing for the first time, but they shared their excitement when they won first and third.

For their placements, the team received a $125 cash prize, and about $7,500 in potential scholarships for the students.

“We never prepare to lose,” he said.

Johnson said he teaches the class in order to get students involved.

“It gives them a sense of pride and leadership for a trade profession,” Johnson said. “It prepares them for the future.”

Johnson said his fellow teachers and staff were “super impressed” by the team’s performance, and they hope to continue to be successful in the future.

As the team began its return trip home, Johnson said he had some words for the victors.

“I told them ‘We just set the bar high,’” Johnson said. “‘We have to come up with a new design if we want to keep winning.’ That is what we need to do.”

JOHNSON CITY—It isn’t gone. The Loafer, a weekly magazine that has been a staple in the Tri-Cities for 30 plus... read more