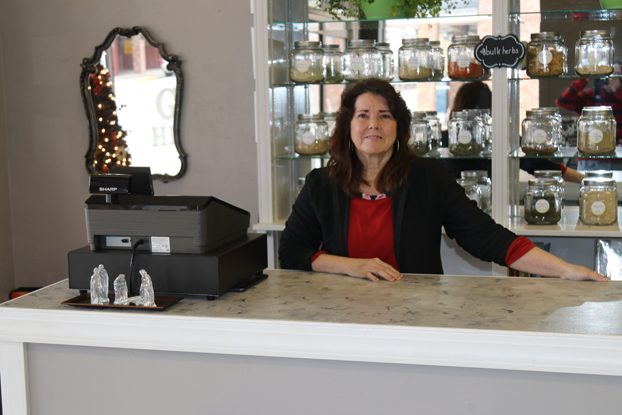 Star Photo/Andrew Wadovick The Heinz family originally hoped to open Glow Herbal this past weekend, but delays in preparing their bakery kitchen convinced them to delay their opening until they can provide all of their products at once.

Creating a small business for the first time has a slew of challenges and hoops that need to be conquered, and though setbacks have delayed their plans, the Heinz family believes the good their store can provide more than outweighs any difficulties they may face.

Patrice Heinz and her family have been working towards opening their own shop in Downtown Elizabethton for at least two months.

“Everything about this is new to us,” Heinz said.

Heinz originally planned to open her shop last weekend, but delays in setting up the kitchen convinced the family to postpone their grand opening.

“We had to decide if we wanted to just open the herb shop first and open the bakery later, or delay the herb shop until we could open both at once,” she said.

Her family came up with Glow Herbal due to the family’s medical history. Heinz’s son, in particular, has digestive and respiratory issues that restrict a lot of the foods he can eat.

“I went to a school of natural healing online,” she said. “I learned how you can take care of yourself and your health.”

From there, the family decided to share what they had learned and open a shop where people could enjoy a treat without cheating on doctor-ordered diets.

“We want to be here for people who cannot have anything else,” she said.

The process of getting the store ready for its grand opening, Heinz said, has been really fun, if not stressful.

“It is hard going through all the regulation hoops and not knowing them beforehand,” Heinz said. “I am sure every small business can relate to that.”

Despite all the difficulty, she said she is excited.

“I have enjoyed every minute of it,” she said.

She said part of her success and optimism is due to the community backing her up every step of the way.

“People want to pitch in and help,’ she said. “The stores next to us have been supportive, handing out flyers and telling people about us.”

She said getting the store ready has been a team effort for the whole family. Her son-in-law set up the cash register, her daughter has helped with the bakery and her husband has assisted with decorations and lighting. Heinz herself has a background in art and has been using it to create display signs.

Though Glow Herbal does not yet have an estimation on when it will officially open, Heinz said she is confident Glow Herbal will be instrumental to the community as a whole.

“We want to be here to support the community, just as they have supported us,” Heinz said.

Many stores have unique and creative gift options, but for many students, those options are either difficult to reach or... read more