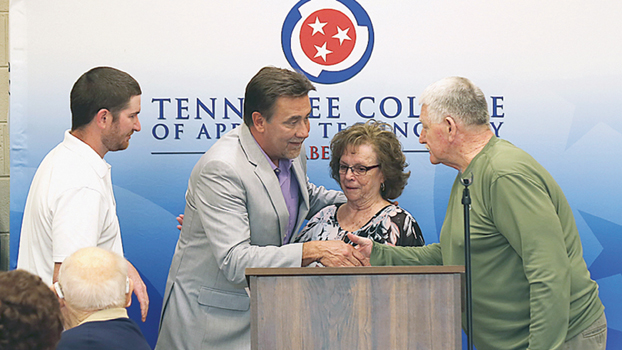 File Photo Carter County Schools Superintendent Kevin Ward meets one of the Hall of Fame recipients during last year's award ceremony. The Imagination Library has been hosting the hall of fame for many years.

The Imagination Library is kicking off its annual Educators Hall of Fame for the 2019 year, bringing recognition and appreciation to the region’s educators.

Chairperson of the library’s board Lilo Duncan said they have been doing the Hall of Fame annually for a number of years.

“This is to honor teachers from the community,” Duncan said.

The board names four recipients of the honor: two from Elizabethton City Schools and two from Carter County Schools. One from each category is still living while the other is deceased.

From city schools, the board named Catherine Armstrong as the living recipient and Thomas Alexander Dugger Jr. as the deceased recipient.

Armstrong got her undergraduate and graduate degrees from East Tennessee State University and has taught for 36 years at a number of schools, including T.A. Dugger Jr. High, East Side Elementary and ETSU.

Dugger Jr. is the person after whom the junior high school was renamed in 1962. Duncan said he was with city schools for roughly 31 years, the second half of which he served as superintendent of city schools. She said he was heavily involved in city schools throughout his career and served heavily in community service as well. He died of cancer in 1962 at the age of 51.

Duncan said the hall of fame’s purpose is not just a fundraiser for the Imagination Library, but to give thanks to school teachers who she said have not been recognized in such a fashion before.

“These are people who have never gotten this recognition before,” she said.

She said this was especially for their efforts to recognized deceased teachers.

“A lot of these teachers older people had, and we want to honor them, too,” she said.

From Carter County Schools, Raymond Hill has spent roughly 42 years in the county school system, serving a variety of positions, including teacher, principal, coach and director of schools. He obtained his bachelor’s degree at Milligan College and his graduate degree at ETSU. He has taught at schools like Poga, Siam Middle School and Hampton Elementary and High School. He served as assistant superintendent and superintendent of county schools.

Duncan said they will hold their award ceremony on Saturday, April 13, at the Tennessee College of Applied Technology at 6 p.m. Tickets will be on sale at the door for $20 each.

“We also recognize the teachers of 2019 with a certificate,” Duncan said. “All proceeds from the event will go towards the Imagination Library.”

The school is located at 426 TN-91 in Elizabethton.

Community History Day is next weekend, but the Elizabethton/Carter County Library wants people to know more about the Appalachia region... read more