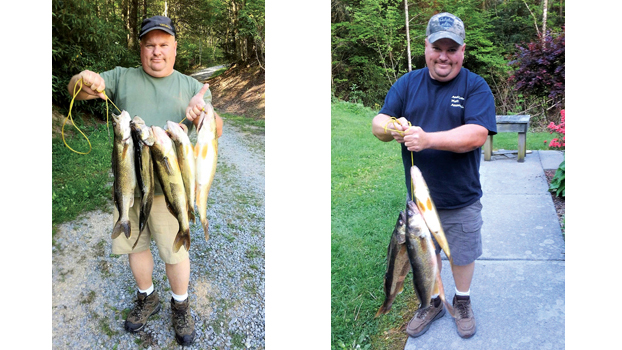 Some say I am old school. I am a firm believer in catch-and-release when it comes to fishing.

I like to catch them, roll them in batter and release them into a nice greasy frying pan. I like to fish, catch fish and eat fish, but not all fish are created equal when it comes to taste.

Personally, one of my favorites is the walleye.

Watauga Lake is one of the best lakes in East Tennessee for walleye. It doesn’t matter what time of year you are fishing, you have a good chance of catching a walleye weighing 10-pounds or more from Watauga.

In the Spring, (March-April) when the water temperature reaches between 43-50 degrees, the fish move up into the tributaries of the lake, including Watauga River and Elk River.

There they find a gravelly bottom of the river to lay their eggs and a female may lay as many as 200,000 eggs or more. The eggs are left, and neither parent cares for the embryos.

One of the best times to fish for walleye is during this period. Often, they will feed before they spawn, and shortly after they spawn.

You will not catch many during the spawn. If you do catch a fish during the spawn, it is often a fish striking at your plug because it thinks it is another fish, and they are protecting their eggs.

Many of these tributaries to Watauga Lake are closed to the use of any lure that has a treble hook during this spawn. You can use any lure you wish, but it can only have one hook.

These regulations run until May and consult the current Tennessee Wildlife Resources Agency Fishing Guide to determine which creeks/rivers have this regulation.

Some of the best lures for the spawn are large Rapala’s in most colors. Usually, the color does not matter, as long as it is big (sizes 9-18) and resembles another fish.

After the spawn is when the real fun begins.

During the months of May, June and July, the fish move back into the deeper water of the lake because of the water temperature. This is when you can catch them at night using jerk baits and crankbaits.

The key for this type of fishing is not to get in a hurry and look for schools of bait fish. In the late evening and night, the bait fish in the lake gather into large schools.

When you find one of these schools, wait and watch the school. Many times, you will see the walleye and other predator fish dive through the large schools, scooping up any bait fish they can.

You can have some success by pulling your lure through and around these schools. The walleyes are lurking just outside the schools, and before you know it, you have a fish on your line.

Keep in mind that this may not happen until late at night, when the water calms down and cools down.

Jason Morgan, one of the best walleye fishermen I know, will fish all night for bass and walleye. There are times he does not get a bite until 3:00 in the morning or even later, but when he does, it is usually a nice size fish.

The largest fish was 27 inches long and weighed 9.3 pounds.

There are many other ways to fish for these delicious fish. Some fishermen will only fish for them by trolling.

Others will fish by using jerk baits or top-water baits when the water is windy and choppy. Still others fish for walleye by using a Cat Paw Spinner with a live nightcrawler attached.

Just like all game fish, they are regulated by the state. You can only keep a limit of five fish, and they must be 16 inches long to keep them.

Be sure to pick up a TWRA Fishing Guide for more rules and regulations.

Walleye are an enjoyable fish to catch and a delicious fish to eat. Serve a few fried “taters” and homemade hush puppies with them, and it doesn’t get much better.

You can be sure that your stomach will thank you.

MURFREESBORO—Thursday was the first day of the TSSAA Spring Fling Track and Field Championships for Large Schools at the Dean... read more