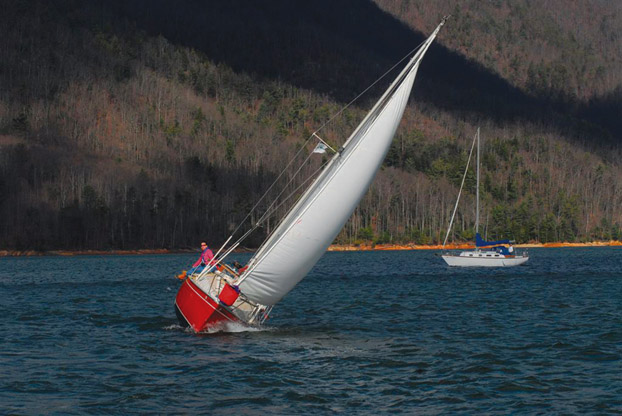 Contributed Photo Sailing enthusiasts will take to Watauga Lake Wednesday morning to participate in the club's annual Frostbite Race. This will be their 20th year.

Though it will most likely be warmer than the title suggests, the annual Frostbite Race will still grace the shores of Watauga Lake this week, the 20th anniversary of the club’s historic tradition.

“This is a time for us to get together as a sailing club,” Little said. “It has been very good for us.”

For those unfamiliar, Little said the conditions of the race have varied wildly from year to year depending on the weather. Sometimes it is just under 20 degrees and snowing the morning of, and other times it is warm enough to wear sandals and T-shirts.

The race itself starts at Watauga Point, and contestants sail from there around an island about two miles out from the shore before returning to where they started. The race itself can take from one and a half to two hours to complete.

He said the experience is great for experienced sailers and newcomers all at once.

“The sailing club teaches sailing,” Little said. “That is where I first learned.”

One challenge in sailing, he said, was the weight distribution. Though the boats are 20 feet long on average and are therefore hard to tip over, it can tip dramatically as body weight moves around during the race.

In spite of how involved sailing can be sometimes, Little said the contestants generally have a fun time with each other.

He said contestants can sometimes sail so close to each other you can reach out your hand and touch the other boat next to you if they are experienced enough. That does not mean crashes do not happen, but Little said they are committed to safety as much as possible, encouraging everyone who joins to wear life jackets.

“The water is still cold,” he said. “The boat has to circle around to get you.”

At the end, club members and enthusiasts will enjoy a potluck dinner together.

“We just want to share sailing with everyone,” Little said.

The race will begin at 2 p.m. Wednesday, Jan. 1, at the Lakeshore Marina Sailboat Dock in Hampton, with registration ending at 12:15 p.m. The public is encouraged to either participate or watch the race if they can attend.

BY IVAN SANDERS STAR SPORTS EDITOR ivan.sanders@elizabethton.com      In a world that is so competitive, it’s always refreshing to see... read more