East Tennessee History: The Death of a President 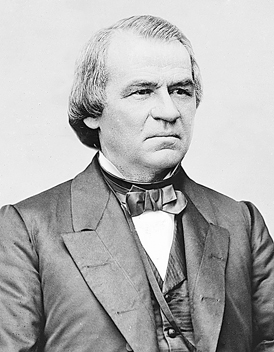 President Andrew Johnson was a former senator, governor and stateman from Tennessee who passed away in Elizabethton in 1875.

It was a hot day on July 31, 1875, when former President Andrew Johnson took his last breath in a bedroom at his daughter’s house.

Johnson had come to Elizabethton, Tenn., to visit his daughter and while here suffered a massive stroke that left him on the doorsteps of death. He finally died as the day faded having lived an interesting yet controversial life as the 17th President of the United States.

Johnson became the mayor of Greeneville, a legislator to Tennessee’s House of Representatives and eventually governor of Tennessee during the 1840’s and 1850’s. He was then voted to the United States Senate by voters in Tennessee in 1858, just as armies were being formed by both the North and the South. War was imminent.

When Tennessee seceded from the Union and joined the Confederacy, Senator Johnson refused to join the state and became a hero to the North. He was also considered a traitor to the South.

Lincoln was assassinated by John Wilkes Booth as the war was ending in April of 1865, and Johnson stepped into the oval office as the 17th President of the United States.

Soon there was political fighting between Johnson and the Radical Republicans who controlled the House of Representatives. Congress thought Johnson was too lenient on the returning Southern states and did all they could to limit his power.

All of this came to a head when Congress voted to impeach Johnson on 11 “high crimes and misdemeanors.” The most important of these accused Johnson of violating the Tenure of Office Act by firing his Secretary of War, Edwin Stanton.

By July of 1875, however, all of this was behind him. He had once again been elected to the Tennessee Senate, and he would be the only president to become a member of the senate after being president.

While he was there, he suffered a stroke, but refused treatment until the next day. Doctors came from Elizabethton, but they did little good. He suffered another stroke on July 30, 1875, and died on July 31 at the age of 66.

His body was buried in Greeneville, Tenn., and he was wrapped in an American flag and a copy of the Constitution of the United States was placed under his head. The first president to be impeached was now dead.

President Andrew Johnson, who was originally from North Carolina, came to Tennessee and left his mark on this state and our entire country. His legacy lives on in all of us who love the United States and who believe in a united nation.

Wife of disabled veteran fights a battle of her own

The Bible does not contradict itself

No one can match the biography of Jesus Christ

What it means to be a Christian