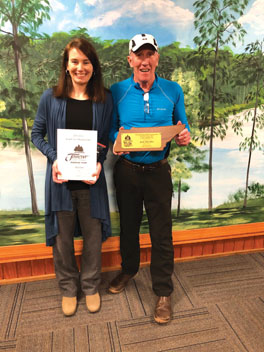 Two local runners, Meg Guy and Bob Hardin, won their divisions in this year’s Tennessee State Parks Running Tour.
Guy, who resides at Roan Mountain, and who until recently was manager at Roan Mountain State Park, won in the Open Female Division (for runners in the 20 to 39 age group). She participated in 13 races and accumulated 290 points.
Hardin of Elizabethton participated in the Veterans Men Division (for men 70 to 79 years of age). He completed 12 races, accumulating 300 points.
This year’s 41st Tennessee Running Tour, the oldest state park running series in the USA, featured a series of 21 road races, with distances ranging from five to 13 miles.
Meg, who is a three-time Boston Marathon runner, has been part of the Roan Mountain Community since 2011, serving first as a seasonal interpretative ranger at Roan Mountain State Park, later as a park ranger, and then as park manager.
She most recently accepted the position as East Tennessee Regional Interpretive Specialist for Tennessee State Parks. In that position she serves 18 parks in this area.
Running is not new for Guy, as she has been running since the sixth grade. She has participated in the Tennessee State Parks Running Tour eight of the last nine years.
Her favorite park to run is Roan Mountain State Park, of course. Her second favorite was Norris Dam State Park, which is no longer on the tour.
“The tour runs are a personal challenge to me. To me, I am not only racing with others, but against myself, hoping to set a personal time record each time I do a race,” said Meg.
“I enjoy the outdoors, and the races also provide time for myself away from work and personal stress,” she added.
Meg is from Polk County in Southeast Tennessee and especially enjoys both the challenge of the races and the opportunity to visit other state parks. “Each of the races have their own unique challenges,” she said.
Hardin, who lives on Stoney Creek, but is originally from the Siam community, began running in high school in Coach Dan Crowe’s track program at Hampton High School. And, he’s been running ever since.
He said he hadn’t seriously given much thought to the Running Tour until this past year. “I had participated in four or five events over the past six or eight years, but this past year decided to take on the challenge of competing,” Hardin said.
He enjoys the camaraderie of the races. “I like people. During the races, we all run the same course, climb the same hills. I appreciate people and what others have done. In the end it’s not how fast or how far you’ve run, but the challenge and the journey,” Hardin shared.
He said probably one of the most interesting aspects of the running tour is to see all the state parks. “Tennessee has a lot of beautiful state parks, and they all have their uniqueness. It’s unfortunate that more people don’t visit them. Park personnel and the state do a great job of maintaining them,” he shared.
In addition to winning this year’s Tennessee Parks Running Tour in his age division, Hardin also owns four state titles in the two-mile and 3K.
Like Guy, Roan Mountain is one of his favorite races on the tour. Other parks included on the tour include David Crockett at Lawrenceburg, Picking Landing, Long Hunter, Standing Stone, Chickasaw, Rocky Fork, Cumberland Mountain, Tims Ford, David Crockett Birthplace at Limestone, Meeman-Shelby Forest, Red Clay, Falls Creek, Johnsonsville, Cedars of Lebanon, Montgomery Bell, Warriors Path, and Natchez Trail.
The races are held from October to March at 11 a.m. in 20 different parks, located from Roan Mountain to Memphis.
According to information provided by Tennessee State Parks, the total number of finishers last season was 2,600.
You Might Like

Easy recipes for when you’re stuck at home

During this time when kids are stuck at home because of the coronavirus, and many are working from home, there... read more