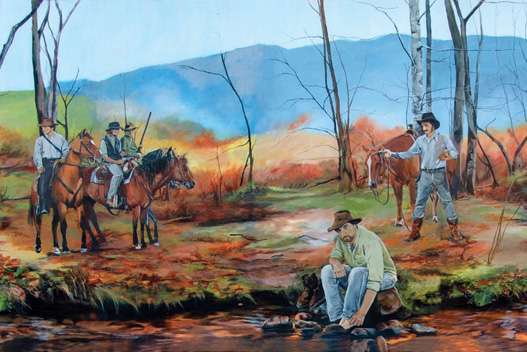 The art mural "Capture of Tom Dooley" was painted by Cristy Dunn and depicts the capture of the infamous outlaw in Johnson County on the banks of Doe River. The mural is one of many featured on Appalachian Art Mural Trail in Tennessee, Virginia, and North Carolina.

The Appalachian Mural Trail believes there is a power in the arts to uplift the human spirit. With over 100 cultural public art murals showcased online at muraltrail.com the mural trail enriches the experience of mural art. Sharing visuals of the murals, inspiring stories behind the art and about the artists with map directions to go see the art in person. The newest murals just added to the trail are located in Mountain City.
Downtown Mountain City Tennessee has an eye opening mural walk through its beautiful downtown area where musical history runs as deep as the hills. Visitors can follow a series of 11 murals that tell the story of Johnson County’s rich musical heritage. Clarence “Tom” Ashley, Clint Howard, Doc Watson, G.B. Grayson and Fiddling Fred Price are just a few of the musical heroes honored in these inspirational heritage murals. Fiddlin’ Fred Price and Clint Howard formed a group with Clarence “Tom” Ashley and were discovered by Folklorist Ralph Rinzler. They knew a young guitar picker named Doc Watson, who was playing on the streets in Boone and together the group hit the road. Among their many show dates were the University of California, the Pete Seeger Show, the Newport Folk Festival, and Carnegie Hall in New York City. Clarence “Tom” Ashley popularized the beloved hymn “Amazing Grace” during the Folk Revival of the 1960s. He first recorded “House of the Rising Sun” back in 1928.
This was one of the most influential albums in the folk revival and was Doc Watson’s first recording. It was inducted into the National Recording Registry in 2013 along with Simon and Garfunkel’s “The Sound of Silence” and Pink Floyd’s “Dark Side of the Moon.”
Everybody loves train songs, and they found their way into the repertoire of Johnson County’s musicians. “Train 45” was one of G.B. Grayson’s biggest hits. Doc Watson, Fred Price and Clint Howard recorded “New River Train.” In his younger days, Clarence “Tom” Ashley and G.B. Grayson spent a lot of time buskin’ at train stations and in the Coal Fields.
The featured mural “Capture of Tom Dooley” depicts the capture of the infamous outlaw, Tom Dooley, who was captured in Johnson County, on the banks of Doe Creek. Blind Fiddler G.B. Grayson recorded the earliest version of “The Ballad of Tom Dooley” back in 1929. This mural, painted by Cristy Dunn, depicts Colonel Grayson with a rock in one hand and a pistol in the other. The legend is that he arrested Dooley with the rock and held the pistol on the North Carolina posse to keep them from hanging him on the spot. He made sure Dooley got home safely for a fair trial. The man painted on the brick is beloved fiddle player and nephew of Colonel Grayson, Frank Grayson.
Cristy Dunn, Executive Director, Johnson County Center for the Arts, and lead artist for the 11 murals, knows the power of the Arts to uplift the human spirit. She says, “When someone sees my work I want them to feel a connection to the sacredness within us all. My grandfather was a fiddler, and his music held the power to transform the greatest of life’s hardships. Somehow, through his music, he taught me the same. I began to paint at a very young age. I remember being swept away by the process of creating when the adversity of life became nearly unbearable. These murals sparked a revival of interest in the history and music of Johnson County and tell our community’s collective story while celebrating a rich heritage that was nearly forgotten.”
The Mountain City Musical Mural Walk is located just north of Boone, N.C., and begins a line of murals on the mural trail continuing on to St. Paul, Va., and in Marion, where “The Song of the Mountains” mural tells the story of local mountain music, then to the north of St. Paul is the town of Coeburn, which features the “Crooked Road” musical murals. North of Coeburn is the town of Wise with a master work of art in the historical Wise Inn, while above Wise is The Town of Appalachia, which has a beautifully painted New Deal Post Office mural.
This trail showcase of cultural art tells a precious story of Tennessee, North Carolina and Virginia, well worth a driving trip into this beautiful, scenic area of the Appalachian Mountains. Take mile marker 294 off the Blue Ridge Parkway north to Boone (where you can stop and view the New Deal Mural, “Daniel Boone”) and up to Mountain City to begin this journey through scenic and artistic beauty.
The Appalachian Mural Trail showcases public cultural art murals that tell the stories and shares the beauty of the Appalachian region. Go to muraltrail.comto read over 100 murals located along the trail and find directions to travel the trail. Witness the power of art to help us through!
You Might Like

‘Warrior’ onion is not just for the dinner table

By JASON REEVES UT Gardens, Jackson The ‘Warrior’ onion is not just a plant for the dinner table. A 2016... read more