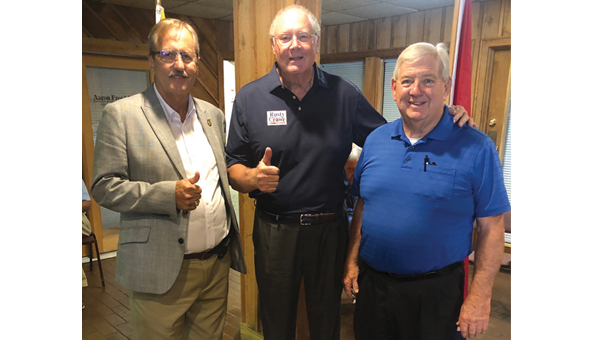 Crowe reflects on time in Senate while on run for Congress

Tennessee State Senator Rusty Crowe has decided to run for Congress and give Washington D.C. “a good dose of Tennessee.”
Crowe, who is married and a father of two, was born in Johnson City. He was named after his uncle, Dewey, who fought in World War II and lost his life over Kiska Island in a P-38 Lightning while fighting the Japanese.
He is an East Tennessee State University alumni who went to work for the FBI upon graduating.
During his time with the FBI, Senator Crowe also went to school at night to study law. He then went on to teach at ETSU for over 20 years. By the ’90s he also had a seat in the Senate.
Crowe described that during his time in the Senate, he fought against pressure for a state income tax he described as unconstitutional.
This decision cost him his job with the university and led to his private-sector career in hyperbaric medicine and wound care management.
Crowe, who has now been in the Senate for 30 years, said that Congressman Phil Roe’s decision to retire resulted in him deciding to run for the seat.
“I started getting call after call from people saying, ‘Rusty please do this, it’s your time to do this, we want you to take Congressman Roe’s place,’ so I’ve been campaigning since February,” he said.
Crowe said he is proud of the work he has done for Tennessee, including putting the Pledge of Allegiance back in schools, aiding children of fallen soldiers with a college education, and helping aid families of dementia and Alzheimer’s patients.
He wants to continue this work in Congress.
“We’ve been able to keep Tennessee on top, one of the best-managed states in the country, because I have followed those good Carter County principals of less taxes, less government, less regulation on our business, personal responsibilities, faith, and family,” he said.
Crowe said he wants to take those values to Washington D.C.
“I think if we take those values and principals we’ve used to keep Tennessee on top and straight, we will be in great shape,” he said.
Crowe went on to say he would be proud to follow in the footsteps of conservative congressmen before him, noting Roe as one of these great congressmen and also a friend.
“I’m working really hard and it’s looking like we have a good chance to win,” he said.
For more information on Crowe, you can check out his Facebook page, “Rusty Crowe for Congress,” check out his website at www.rusty4congress.com, or contact him at rusty@rusty4congress.com.
“I’d be proud to have your vote and it’s been an honor to serve you, and I’d be proud to serve as your next congressman,” he said.
You Might Like