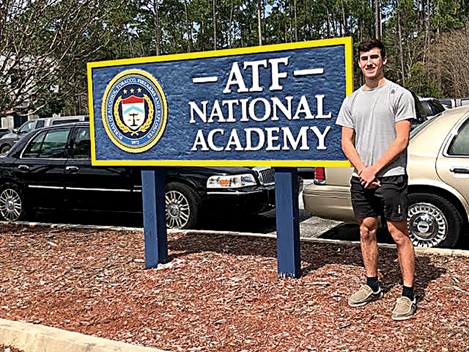 Jacob Jenkins, a senior at Daniel Boone High School, was recently awarded the LeBleu, McKeehan, Williams and Willis Scholarship given by the ATF Association. Jenkins was one of six students across the country awarded this year’s scholarship.
According to its website, the ATF Foundation established the scholarship to recognize the ultimate sacrifice made by the ATF Special Agents Conway C. LeBleu, Todd W. McKeehan, Robert J. Williams and Steven D. Willis at the Branch Davidian Compound located near Waco, Texas, on February 28, 1993.
Special Agent Todd McKeehan was an Elizabethton graduate.
Jenkins is the son of Senior Special Agent Jamie Jenkins, who at the time of McKeehan’s death was a deputy with the Carter County Sheriff’s Department and served as part of the Honor Guard for McKeehan’s services.
Scholarship Applicants must be the child, grandchild or great-grandchild of a member of the ATF Association. The ATF Foundation is a non-profit organization made up of former and current ATF colleagues and its purpose is to support members and members’ families in times of need.
The essay Jenkins wrote for the award mentioned his achievements in the classroom (4.18 gpa), on the field (1st Team All-Conference Place Kicker), and his volunteerism with his church, but noted he feels he’s yet to accomplish anything deserving of a scholarship named after these agents who gave the ultimate sacrifice, but hoped the committee would consider an investment in him as he will strive to live up to their legacy. Jenkins plans on becoming an ATF agent himself.
The 500-word scholarship essays were scored in a blind process by a panel of current or former ATF personnel who were part of the law enforcement operations near Waco, Texas when the agents were killed. The scholarship is in the amount of $1,500.
At this time Jenkins is undecided where he will attend college.
You Might Like

VFW Post 2166 Auxiliary is doing a food distribution with Second Harvest Food Bank for veterans and their families who... read more