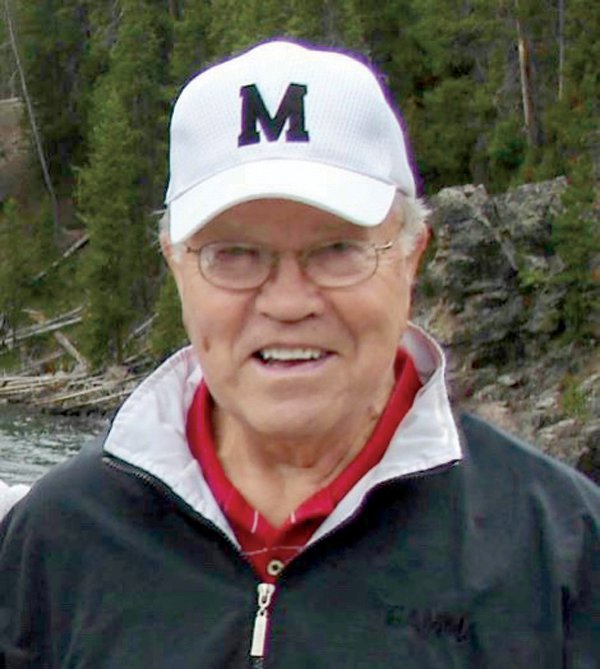 Coach Duard B. Walker Sr., 95, passed away on Tuesday, August 18, 2020, at his Johnson City residence with his entire family at his side. Duard was born in Johnson City on October 13, 1924, and raised in Piney Flats, Tenn. He was the son of the late Dumas and Lessie Gay Walker. Duard was also preceded in death by a brother, Norman, who was killed in WWII. After achieving academic success and playing an active role in sports in high school, he entered East Tennessee State and played baseball as a freshman. He transferred to Milligan College the next year and played several sports. As World War II was underway, he was assigned to the Navy V-12 College Training Program at Milligan. As a LTJG, he later participated in the battles at Iwo Jima and Okinawa.
After three years in the Navy, he returned to Milligan in 1946, where he remains the only person to have earned 12 varsity letters in five different sports. He was also awarded the Scholar Athlete Trophy. He met Carolyn Roberts while at Milligan, and they married on August 14, 1947. In 1948, Duard and Carolyn became the first married couple to be crowned May King and Queen at Milligan. After graduating in 1948 and completing his Master’s Degree at Columbia University, he coached boys and girls basketball, football and taught for two years at Farragut High School in Knoxville.
He returned to Milligan in 1951 to teach various classes in Health and Physical Education. Through the years, he coached baseball, basketball, track & field, cross country and tennis. His cross country teams won seven consecutive conference championships. He was especially pleased with a 1957-58 season sweep against then arch-rival East Tennessee State in basketball. He was also Athletic Director, Dean of Men and Head Resident of a men’s dormitory.
Walker received Milligan’s highest honor, the Fide et Amore medallion for Distinguished Service. He was also an inaugural member of the Milligan Hall of Fame, a distinguished Milligan alumni, the 2001 NAIA National Athletic Director of the Year, an inductee into the 2008 class of the NAIA Hall of Fame, the Carter County Sports Hall of Fame, the Northeast Tennessee Hall of Fame and was inducted into the Tennessee Sports Hall of Fame in 2016. The Appalachian Athletic Conference named the Duard Walker All-Sports Trophy in his honor. In December of 2000, Sports Illustrated featured him with an article entitled, “Like a Rock,” detailing his life and legacy.
Actively involved in Hopwood Christian Church, he served in several capacities, including Deacon, Elder, Trustee and Chairman of the Board. His outreach to the community included: Little League coach, Chairman of the Board of the West Carter County Volunteer Fire Department, President of the Optimist Club, TSSAA basketball and football official and served as a Tennessee TSSAA Football Commissioner. Duard enjoyed an active lifestyle — spending time with his family, including his love of horses, playing tennis, badminton and pickleball. His participation in the Senior Games led his team to a National 3rd place in badminton. At age 91, he won gold in the 100 and 50 yard dashes, shot put, discus, javelin, softball throw, long jump, shuffleboard and pickleball. In leading by example, Duard’s students realized what he taught went beyond academics and sports. He taught them about life and having the character and integrity to be the best they could be. This past August 14, Duard and Carolyn celebrated their 73rd wedding anniversary with their five children, all of them Milligan graduates.
Survivors include his wife of 73 years, Carolyn (Roberts) Walker; brother, John Wallace (Sue) Walker; children, Cindy (Billy) Gober, Teresa (Kevin) Knox, Buff (Debbie) Walker, Gary (Gina) Walker and Tracy (Susan) Walker; grandchildren, Chad (Jessica) Fulwider, Derrick (Whitney) Fulwider, Jace (Beth) Fulwider, Denyse (Paul) Brackett, Greg (Joni) Gober, Jennifer (Matt) Storm, Tony (Lisa) Stout, Anlyn (John) Hughes, Stephanie Sibley, Trey Walker, Sky Walker, Gavin Walker, Brent (Amanda) Parker, Brittany (Andy) Tynon, Kyle (Dara) Knox, Katie (Tyler) Pearson, Keith (Alyssa) Knox; 15 great-grandchildren; sister-in-law, Pat (Clark) Aldridge-Hinkle; nieces and nephews include Jeff (Mary Ellen) Walker, Robin (David) Jimenez, Jeff (Tembra) Aldridge and Melanie Aldridge.
Duard donated his body to the Quillen School of Medicine for medical research. Due to the coronavirus, a memorial service/celebration of life will be held at a later date (to be determined). In lieu of flowers, donations may be sent to The Duard & Carolyn Walker Scholarship Fund (Milligan University, Duard & Carolyn Walker Scholarship Fund, P.O. Box 750, Milligan, TN  37682) and/or Hopwood Memorial Christian Church (Hopwood Memorial Christian Church Building Fund, P.O. Box 149, Milligan, TN 37682). Condolences may be sent to the Walker family online at www.dillow-taylor.com.
Dillow-Taylor Funeral Home & Cremation Services, Jonesborough, (423) 753-3821.
You Might Like