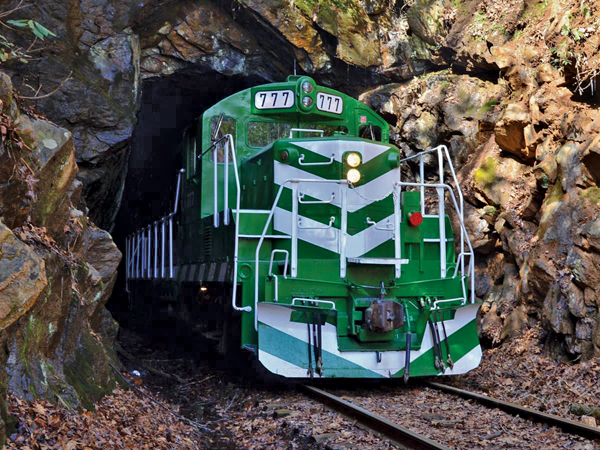 Two train excursions are planned – Sept. 12 and 13 – through the Smoky Mountains by the Watauga Valley Railroad Museum. Both trips will feature a ride through the mountains and countryside of western North Carolina from Bryson City, N.C. and the Nantahala Gorge. The trip will cover most of the operating trackage of the Great Smoky Mountains Railroad.

Second train excursion through the Smokies planned by WVRM

Due to the high demand and a quick sell-out of its 2019 excursion trips, the Watauga Valley Railroad Museum is offering a second fall excursion to give more people a chance to ride a train through the beautiful Smoky Mountains.
The excursion is planned for September 12 and 13. Both days will feature a ride through the majestic mountains and beautiful countryside of western North Carolina from Bryson City, N.C., and the Nantahala Gorge.
This trip will cover most of the operating trackage of the Great Smoky Mountains Railroad. These are one-day trips and each day is sold separately.
The track follows the route of the former Southern Railway’s Murphy Branch Line, established in 1891, with its five percent grade and many bridges. Much of the route hugs the banks of the Little Tennessee and Nantahala Rivers. It crosses Fontana Lake on a trestle spanning 780 feet to 100 feet above the lake.
The Great Smoky Mountains Railroad has become a favorite of film producers over the years. The train wreck scene in the 1993 movie, The Fugitive, starring Harrison Ford and Tommy Lee Jones, was filmed along the Great Smoky Mountain Railroad. The railroad was used in the filming of the 1996 comedy, My Fellow Americans, starring Jack Lemmon and James Garner, when they stumble onto a charter train full of UNC-Chapel Hill fans headed for the NCAA Final Four. Train scenes in the 1998 movie, Forces of Nature, starring Ben Affleck and Sandra Bullock, were also filmed on the Great Smoky Mountains Railroad.
Upon arrival in Bryson City, N.C., passengers will have time to choose from several restaurants in town and visit the many shops. Bryson City is a laid back, non-touristy town of 1,300 with more stop signs than stoplights. It’s an easily strollable town with local bookstores and arts and crafts galleries with working artisans, a bike shop, two fly-fishing shops, a historical museum, a fly-fishing museum, an aquarium, a scenic train, two breweries, and a surprising variety of restaurants. Bryson City is only 10 miles from the famous Cherokee Indian Reservation.
All excursion ticket holders get complimentary admission to the Smoky Mountain Lionel Train Museum before boarding the train. The museum boasts a collection of 7,000 Lionel engines, cars and accessories, and an impressive operating layout and children’s activity center.
Passengers may choose to ride in comfort in Tourist Coach, Open Air Coach, or Crown. All classes offer seating in vintage, restored passenger cars. Tourist Coach Class cars feature ceiling fans and windows that open and close for fresh air viewing. Open Coach Class is great for taking pictures and seeing the beautiful scenery. Crown Class cars offer larger windows for better viewing (windows do not open) and climate control for passenger comfort.  All passenger cars are heated and have restrooms throughout the train.
CROWN CLASS ticket price is $99/adult and $80/child [2-12]
TOURIST COACH OR OPEN AIR COACH CLASS ticket price is $86/adult and $70/child [2-12]
Passengers have several options for meals aboard the train, including a box lunch, which includes chips, cookie, and choice of drink. Passengers will pick up box lunches in the Concessions Car on the train. Box lunches must be pre-purchased with ticket order at $11 per meal.
Other lunch options include the concessions car, which has sandwiches, drinks, chips, and snacks available for purchase on board, or bring your own.
Tickets and pre-purchased meals may be ordered only online by credit card at wataugavalleynrhs.org. Click on the EXCURSIONS link.
Note: Ticket purchases must be made no later than Thursday, Sept. 3, by 6 p.m.
Questions about the trip? Go to wataugavalleynrhs.org or email wataugavalley@gmail.com.
You Might Like

May is the beginning of peach season, which continues until late September, but peach season is at its peak in... read more