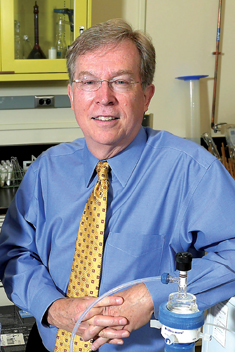 JOHNSON CITY – Researchers from East Tennessee State University are part of an international team of scientists from Europe, South America and the United States who have published a paper on new insights to how the human immune system recognizes the pathogenic fungus Candida auris.
Candida auris, which first surfaced in 2009, is resistant to many standard anti-fungal therapies and is not easy to diagnose. It has been identified as an emerging pathogen and a new public health threat. The team’s research has been able to pinpoint a potential Achilles heel for this fungus, which may result in new and more effective drugs.
The project began as an international collaboration between Drs. Mihai Netea and Jacque Meis of Radboud University in the Netherlands and Dr. David L. Williams, Carroll H. Long Professor of Surgery at ETSU’s Quillen College of Medicine.The project grew to include seven universities from the U.S., Europe and South America.  “We started to investigate C. auris with international colleagues because there was virtually nothing known about this fungus,” says Mariolina Bruno of Radboud University Medical Center’s Department of Internal Medicine (the Netherlands) and first author of the paper.
The research results have now been published in Nature Microbiology. The study shows that the fungus is especially dangerous for people with compromised immunity. A careful study of the human immune response to the C. auris infection demonstrated that specific components of the cell wall of the fungus play an essential role in this recognition.
“The C. auris contains unique structures that are not found in other fungi. Those specific chemical structures stimulate the immune system enough to take action and clear the fungus,” said Williams, a senior author on the paper who also serves as co-director of ETSU’s Center of Excellence in Inflammation, Infectious Disease and Immunity.
The fact that C. auris is considered a serious and emerging infectious disease is mainly due to its resistance to many disinfectants, fungicides and anti-fungal drugs. People with an invasive C. auris fungal infection have 30-60% chance of dying because of the resistance of the fungus to many anti-fungal treatments. What was needed is an alternative approach to the prevention and/or treatment of C. auris infection. To that end, this international team of scientists undertook this comprehensive study of the host immune response to C. auris. The results of that research, as described in the paper, provide further support from an immunological and microbiological perspective for the development of new and efficient anti-fungal drugs for C. auris that potentially target the cell wall of this fungal pathogen.
In addition to Williams, several other ETSU researchers were involved in the project, including Dr. Zuchao Ma, assistant professor of Surgery, and Dr. Douglas Lowman, associate professor of Surgery.  Dr. Peter Rice, professor emeritus of Pharmacology, and Bridget Graves, both at ETSU, also participated in this research.
To learn more about ETSU’s Center of Excellence in Inflammation, Infectious Disease and Immunity, visit www.etsu.edu/com/ciidi/default.php.
You Might Like

Bus-bicycle accident sends a local child to the hospital﻿

An after school accident involving a child on a bicycle and a Carter County School Bus sent the child to... read more