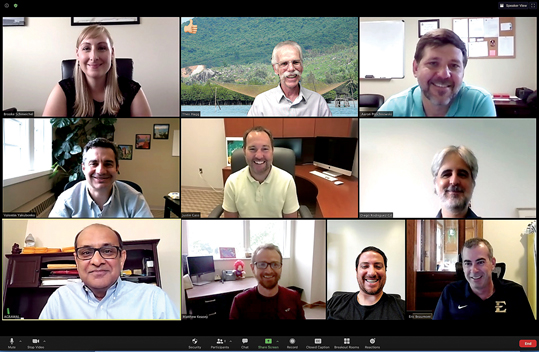 “We have welcomed several new faculty members to the Department of Biomedical Sciences over the past few years,” said Dr. Theo Hagg, chair and professor. “The investment that the College of Medicine has made in recruiting these new people is clearly paying off – not just in terms of new grants, but in terms of expertise that is relevant to our region.

“The mission at Quillen College of Medicine is focused on training physicians for primary and rural care. The research we are doing in the Department of Biomedical Sciences deals with many of the issues our students will see in these areas, so this expertise permeates into the teaching taking place at Quillen.”

Two new faculty members who were hired earlier this year are conducting research that could lead to better understanding of addictive behavior.Dr. Justin Gass, associate professor, received a $336,375 grant from the National Institutes of Health (NIH) to study to study the comorbidity of alcoholism and PTSD (post-traumatic stress disorder). Gass recently won another five-year NIH grant together with an investigator at his previous institution, expected to total approximately $1 million for ETSU.  They will investigate the impact of adolescent alcohol abuse on cognitive behaviors in adulthood, and how early traumatic events have lasting effects on future alcohol use, relapse-like behaviors, and vulnerability to future traumas.”

Dr. Brooke Schmeichel, assistant professor, received a $746,857 grant from the National Institute on Drug Abuse to study the progression from recreational use of methamphetamines to addictive behaviors. She is focusing on the role of a particular peptide and testing drugs that are FDA-approved for sleep problems.

Several researchers in Biomedical Sciences focus on other areas in neuroscience, or the scientific study of the nervous system.Dr. Eric Beaumont, professor, and Dr. Diego Rodriguez-Gil, assistant professor, received a $129,870 NIH SPARC (Stimulating Peripheral Activity to Relieve Conditions) grant to further the study of vagus nerve stimulation, which is used as a therapy for multiple cardiovascular disorders, including hypertension, coronary artery disease and heart failure. Their study will improve understanding of the mapping from vagus nerve receptor endings in the ear through the brain and to the heart.

Dr. Chad Frasier, assistant professor, received a $394,102 grant from the National Institute of Neurological Disorders and Stroke (NINDS) to study new mechanisms by which excitability of the heart tissue is altered due to compromised energy production by cells in Dravet Syndrome models. Dravet Syndrome is a catastrophic pediatric epilepsy that largely arises from loss-of-function mutations in sodium channel genes.

Dr. Matt Keasey, assistant professor, received a $148,000 grant from NINDS to study calcitriol, the active component of vitamin D, as a treatment for primary familial brain calcification (PFBC), a neurodegenerative condition with calcium deposits forming in the brain. The results of his study could also transfer to other diseases where soft tissue calcification is a major factor, such as atherosclerosis.

Hagg, chair and professor, received a $2.14 million from the NIH National Institute on Aging to continue his research on the molecules that normally stimulate the formation of new brain cells after stroke. His study focuses on drug developments specific to women who have suffered strokes, as well examining effects on new brain cell formation in men, perhaps in the future giving drugs that block the detrimental effects of testosterone after stroke.

Dr. Alok Agrawal, professor, received a $1.85 million award from the National Institute of Allergy and Infectious Diseases, NIH, to further develop his research on a protein that could be used to develop a treatment for unstoppable severe septicemia from pneumococcal infection. This research continues Agrawal’s study of C-reactive protein (CRP), a component of the body’s inflammatory response that was discovered about hundred years ago in the blood of patients infected with Streptococcus pneumoniae.Dr. Aaron Polichnowski, assistant professor, received a $444,000 grant from the National Heart, Lung and Blood Institute to investigate the role of hypertension and increased blood pressure transmission in the kidney. He will also investigate the extent to which even modest increase in blood pressure following acute kidney injury contributes to the progression of chronic kidney disease.

Dr. Valentin Yakubenko, associate professor, received a $154,000 award from the American Heart Association to determine the mechanism of macrophage retention at the site of chronic inflammation. The information obtained from this study will provide a new strategy for the treatment of chronic inflammatory diseases.

To learn more about the Department of Biomedical Sciences, visit www.etsu.edu/com/dbms/.

JOHNSON CITY – Bucky’s ETSU Road Trip is about to begin. For the next several weeks, admissions counselors from East... read more