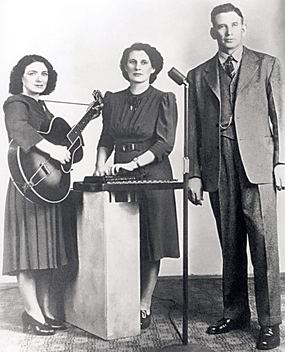 The Carter Family is among early musicians featured on a new album by Dr. Ted Olson, created to correct misconceptions about the historic Bristol Sessions.

JOHNSON CITY – For two decades Dr. Ted Olson, a professor in East Tennessee State University’s Department of Appalachian Studies, has been at the vanguard of efforts to study and publicly celebrate the historic recordings popularly known as the Bristol Sessions, which were conducted by influential Victor Records producer Ralph Peer.
Widely characterized as a seminal event from the early years of commercial recording, the Bristol Sessions actually involved two distinct sets of recording sessions, the first occurring in late July and early August 1927 and the second in late October and early November 1928.
The 1927 sessions have received most of the attention, receiving in the 1980s the nickname “the Big Bang of Country Music” and earning Bristol, Tennessee/Virginia, the “Birthplace of Country Music” moniker. The 1928 Bristol recordings have been as marginalized as the 1927 recordings have been romanticized.
Now, with the release of a new album he produced and curated for Germany’s Bear Family Records titled “We Shall All Be Reunited: Revisiting the Bristol Sessions, 1927-1928,” Olson hopes to correct misconceptions about what happened in Bristol.
In extensive liner notes for this album, Olson argues that the 1927 Sessions — while yielding debut recordings by the Carter Family and Jimmie Rodgers — were not necessarily “exceptional”; while integral to the larger continuum of roots music recording happening across the U.S. throughout the 1920s, the 1927 Bristol recordings were neither as pioneering nor as stylistically innovative as often characterized.
The Carters, Rodgers and several other music acts generated classic recordings in Bristol, of course, though the Bristol Sessions occurred soundly in the wake of genre-defining recordings made earlier in both permanent and temporary studios in Northern and Southern cities.
The new album’s notes draw heavily from Olson’s own scholarly reassessment of those 1927 recordings as well as from scholarly dialogues conducted with fellow music historians.
In 2005, Olson and pioneering music historian Charles K. Wolfe co-authored the first in-depth scholarly book on the subject, “The Bristol Sessions: Writings About the Big Bang of Music,” which received the Appalachian Writers Association Book of the Year Award.  In 2011, Olson produced and wrote liner notes for the first full Bristol Sessions compilation (featuring all extant 1927 and 1928 recordings), and that boxed set, released by Bear Family Records, received two Grammy Award nominations.
These two projects led him to investigate other East Tennessee music legacy stories, such as Columbia Records’ Johnson City Sessions and Brunswick/Vocalion’s Knoxville Sessions, which resulted in separate Bear Family boxed sets and which were vital in expanding awareness of the Appalachian roots of 20th-century commercial music.
“We Shall All Be Reunited”casts new light on an old story, not only by reassessing the 1927 recordings but also by drawing long-overdue attention to the overlooked 1928 Bristol Sessions recordings. Painstakingly remastered by sound engineer Marcus Heumann in 2020, the 26 tracks on the album include 15 key recordings made in Bristol during late July and early August 1927 — the debuts of the Carters and Rodgers as well as recordings by such other important early country musicians as Ernest Stoneman, Henry Whitter and Blind Alfred Reed — as well as 11 stand-out selections from Peer’s October and November 1928 recordings in Bristol. Among these are several classic recordings of old-time and gospel music by Uncle Eck Dunford, Ernest Phipps and Alfred Karnes.
The liner notes for “We Shall All Be Reunited,” which Olson wrote based on recent research and scholarly discussion, tell “the rest of the story” and provide a holistic portrayal of the Bristol Sessions, recounting what happened in Bristol, who participated in the sessions, why those recordings were historically significant, and also how that event was romanticized and distorted by myth, hyperbole and hype.
When reviewing the album for Country.de, an online magazine covering international country music news, Thomas Waldherr called Olson’s 44-page booklet of liner notes the highlight of the album. “In it, Olson corrects the myth,” Waldherr wrote. “He does not destroy it, he places it in the landscape of recording sessions in the South of that time. In Asheville, N.C., Knoxville and Johnson City, Tenn., important auditions were also taking place for the transformation process from old-time to country music. But Bristol emerged as the ‘winner’ of the title ‘Birthplace of Country Music’ through the best lobbying effort.”
“We Shall All Be Reunited” continues the series of Bear Family’s budget-priced single-CD releases exploring East Tennessee’s influential 1920s-era location recording sessions. The first in that series was the Independent Music Award-winning 2019 album “Tell It To Me: Revisiting The Johnson City Sessions, 1928-1929,” likewise produced and curated by Olson.
You Might Like