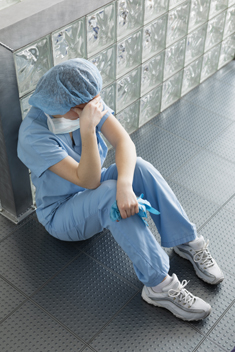 COVID beds fill up as virus pressure builds in Marseille

By DANIEL COLE
Associated Press
MARSEILLE, France (AP) — All five intensive care beds dedicated to COVID patients are in use at the Laveran Military Training Hospital in Marseille, and its doctors are bracing for more.
It’s a small ward in a mid-sized hospital, but what’s happening here reflects growing pressure on medical facilities across France as infections resurge. The hospital’s medical staff suit up to enter the COVID zone, hook patients up to monitors and tubes for hydration, nourishment and medicine, and meet frequently to discuss their prognosis.
While France’s daily case count climbed back up as summer vacations brought relaxed virus vigilance, the number of infected patients in hospitals and intensive care units stayed low and stable for several weeks. Until now.
Doctors in Marseille — the country’s latest virus hotspot — started sounding the alarm this week. The 70 ICU beds dedicated to virus patients in France’s second-biggest city and the surrounding Bouches-du-Rhone region were all occupied by Tuesday. The number of ICU virus patients in the region has doubled in the past 10 days and now surpasses 100.
“The beginning of summer was relatively calm but in the past few weeks there is a new rise,” said Laveran’s chief doctor, Pierre-Yves. He can only be identified by his first name according to military policy. “What is going on here is just like what is going on in other hospitals of the region.”
The region’s hospitals are re-activating emergency measures put in place when the pandemic first hit, to ensure they’re able to handle growing new cases. Since they’ve outgrown COVID-specific ICU wards, they’re putting people in units meant for non-virus patients instead.
“In March, April and May we were able to absorb the epidemic wave by abandoning other hospital care activities, and today what is at stake is being able to continue treating every other patient while being able to face the epidemic,” Pierre-Yves told The Associated Press on Thursday, describing it as a battle on two fronts.
On the whole, French authorities say they’re better-prepared this time than in March, when infections quickly skyrocketed and the military intervened to transport patients and build France’s first-ever peacetime field hospital. At least 30,700 people with the virus have died in hospitals or nursing homes in France, among the highest death tolls in the world.
At the Laveran hospital, the doctors and nurses appeared calm and studied as they approached the now-full COVID ward. They ditched their surgical masks for higher-protection masks, tied on plastic headgear and slid into disposable plastic gowns.
A team of nurses turned one ICU patient onto her stomach to ease pressure on her lungs, adjusting the tubes attached to her back and monitoring her vital signs.
In the midst of it all, one nurse took a few minutes out to brush the patient’s thick black hair, then several more minutes moisturizing her body — an example of how the medical staff not only keep patients alive but also care for them in mundane ways you don’t expect to see when survival is at stake.
Among the new virus patients, Pierre-Yves said, “Some are older but not all. There are also adults of 50 to 60 years old with risk factors such as hypertension, diabetes and obesity, all factors that we saw already during the first wave.”
Unlike in the spring, France is now testing massively, which is one reason the case count is rising so fast. Authorities reported 9,843 new cases Thursday — the country’s biggest one-day jump since the pandemic began.
The number of people in intensive care with the virus is now at its highest level since June, but at 615 people nationwide, it’s still a fraction of the more than 7,000 ICU virus patients in the spring.
Epidemiologist Laurent Toubiana, director of the Irsan research institute, argues that this suggests the virus is on the wane.
“The fact that there are no longer people who are gravely ill is explained by the dynamic of epidemic itself — in other words it has run its natural course, like all epidemics,” he told the AP. “The entirety of the population is not susceptible to getting ill. Only a portion of the population can be gravely sick and even die.”
French President Emmanuel Macron promised to unveil new virus restrictions Friday, but warned against “ceding to panic.”
“The virus is circulating widely,” he acknowledged, but added that the new measures would be aimed at allowing the French to “live with the virus” — including keeping children in school.
France reopened all its schools for in-person classes last week and many parents returned to work as the government tries to revive the economy without creating a new health crisis.
While the central government tries to avoid a new nationwide lockdown, officials are focusing on local action instead. Marseille regional authorities on Wednesday ordered bars and restaurants to close early, and banned any unauthorized gatherings of more than 10 people.
Other regions are watching Marseille closely, wary that they too could see a similar situation in the coming weeks.
Laveran’s chief doctor says preparation and coordination is key: “We need to stay a step ahead.”
You Might Like