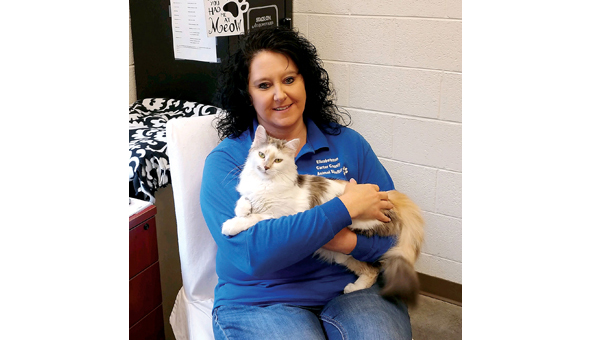 File photo Posada urges the community to report animal abuse whether you see it or suspect it.

Shannon Posada: Report animal cruelty if you see it or even suspect it

Animal cruelty will not go unpunished in Carter County.
This is what Shannon Posada, Director of the Elizabethton/Carter County Animal Shelter, hopes the public can get from the latest animal cruelty case regarding Ryan Garland. Garland pleaded guilty under diversion on Wednesday to aggravated cruelty to animals. He was arrested in August of last year when a kitten showing signs of abuse was brought into the shelter.
“I hope the community knows we are serious about these cases, and if we have a suspected case of animal cruelty we will take it to the fullest court or the farthest extreme that we can to make sure justice is served for these animals,” said Posada.
Garland was sentenced to one year probation and ordered to pay $200 a month in restitution to the shelter. He is also no longer allowed to own animals.
“I think Mr. Garland knew that we had proper documentation to convict him of this charge and that’s why he took the plea deal,” Posada said.
When the kitten was brought into the shelter last year, it had a shaved head, cut off whiskers and forcibly removed claws. Now, the cat is in a foster home and has become bonded to this individual. Posada said issues the kitten had that could be treated were, however there are ongoing medical issues that will follow this cat for the rest of its life.
While Posada said she knows people are upset at the ruling, she thinks judges in the cases she’s sat in on really wanted to see justice for the animals involved.
She said she intimately would like to see stricter animal cruelty laws in Carter County and nationwide. She believes stricter laws would help stop cruelty.
“The fact is, there is more animal cruelty in the surrounding areas, every area, a lot more than what people know or realize,” she said.
According to Posada, cases often go unnoticed, as with the kitten brought into the shelter last year.
Posada asks the public to please report animal cruelty if they see it or even suspect it.
“If you see animal cruelty, if you suspect animal cruelty, if it’s a concern to our citizens, it is an issue we need to look in to,” she said.
While the shelter typically remains at capacity, sick or injured animals, regardless, will be helped. People are asked to call ahead to the shelter due to the COVID-19 pandemic. There are policies in place to surrender animals, and some may be asked to wait if they can due to capacity. Those placed on any waiting list are called back as soon as a space is available. Posada noted the ultimate goal is to be fair to the community and be there when needed.
“We are there to help animals and owners who are struggling as well,” said Posada.
Posada said she believes in being a voice for the voiceless.
“They don’t have a voice, so we are their voice,” she said. “They deserve a fighting chance and they don’t deserve to be harmed in any way. They are a breath of life.”
You Might Like