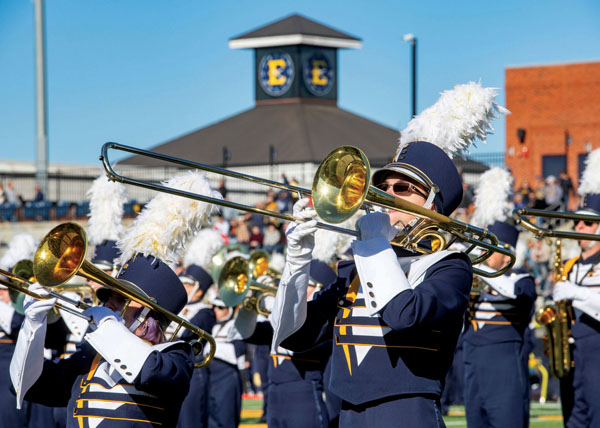 The ETSU Marching Bucs will present Friday night concerts through Oct. 9. at the Borchuck Plaza outside the Charles C. Sherrod Library.

The Marching Bucs of East Tennessee State University may not be able to take the field at William B. Green Stadium this fall, but that’s not stopping them from making music!
Members of the ETSU marching band will begin a series of Friday Concerts on the Plaza. These free public mini-concerts will be held at 3:30 p.m. at Borchuck Plaza outside the Charles C. Sherrod Library and continue through mid-November,
“One of the defining traits of the ETSU Marching Bucs is the family atmosphere that exists within the group,” said Dr. Joe Moore, director of athletic bands at ETSU. “Many of our students haven’t been around each other since mid-March, and many of our new students haven’t even met their fellow band members in person yet. And we’ve had many comments from people about how much they missed hearing the Marching Bucs practicing and performing on campus, including President (Brian) Noland.
“Music has been such a stabilizing factor during these trying times that we wanted our students to have the opportunity to rehearse together again, as well as share their passion for music with everyone they can, even though our marching band class is in an online situation for this fall.”
To that end, Moore reached out to the band students living either on campus or within a reasonable driving distance to see how many would be interested in voluntarily gathering in small groups to practice and, possibly, to perform. Within less than a minute of sending his email, Moore began to be inundated with responses from students wishing to participate, including some willing to drive further distances to take part.
With that response, the idea came about for the Friday Concerts on the Plaza series. For these concerts, the Marching Bucs will be divided into Blue and Gold pep bands that will alternate performances. Also featured during the series will be the Marching Bucs’ Majorettes and Color Guard performing to recorded popular music.
School songs traditionally associated with football season will be performed by the Gold Band on Oct. 2. The ETSU Majorettes, with the ETSU Trumpet Ensemble as special guests, will be featured on Sept. 25, and the ETSU Color Guard on Oct. 9.
Motown favorites, including Michael Jackson’s “Thriller” to celebrate Halloween, and “Songs of Joy” will be presented later in the series.
“We hope that people on campus will stop and listen, or those working in offices might be able to step outside and listen, as a way to brighten their Friday afternoons,” Moore said. “We plan to video and share on social media to reach more people and showcase the talent of our ETSU students, and to let people know that music is continuing to be made at ETSU.”
Members of the campus community and public attending these performances are asked to wear masks and observe social distancing in accordance with ETSU’s COVID-19 guidelines.
In the case of inclement weather on the day of a concert, that day’s event will be cancelled.
You Might Like

What are the rules on masks in schools?

By ASSOCIATED PRESS Whether students have to wear masks, and the trouble they could face if they don’t, depends on... read more