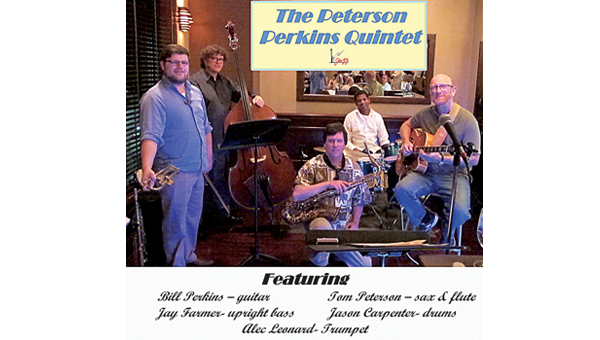 Get out your dancing shoes for some jazz.
The Peterson Perkins Quintet will be performing at the Bonnie Kate Theater on Sept. 22 from 8-10 p.m.
The quintet blossomed from the Johnson City Jazz Jam. The jam occurred weekly at the Carnegie Hotel prior to COVID-19.
Band members include:
The band’s performance is part of a jazz series being held at the Bonnie Kate Theater. It all began when Casey Eryasa, who is part of the “Friends of the Bonnie Kate,” was attending the Johnson City Jazz Jams at Wellington’s Restaurant. After reaching out to Rick Wimberly and Deb Wilkerson and saying that Bonnie Kate could have CDC approved concerts, she was paired with Perkins. Perkins helped organize the four-concert series.
“I have been organizing jazz events for some years and was excited about the potential of this great venue,” said Perkins.
The series kicked off on Sept. 15 with “Eddie Dalton and the TJO Seven.” This group is composed of members of The Tri-Cities Jazz Orchestra led by Eddie Dalton.
Jeff Treadway with the Bonnie Kate Theater said the event last week was a success and anticipates the same for the remaining concerts in the series.
On Sept. 29, ”ETSU Jazz Faculty and Friends” will take the stage. This group is made up primarily of ETSU Jazz Program musicians. The group includes some past Grammy Award Winners and other very accomplished jazz musicians.
Lastly, on Oct. 6, “The Funky Truth” will perform. This group plays a variety of fusion and jazz funk music. They are led by jazz drummer Danny Farmer and will feature a well-known jazz recording saxophonist from Knoxville, Will Boyd.
These are ticketed events and the cost of the tickets are $10. Tickets can be purchased online at https://www.showtix4u.com/events or at the door. There will only be 50 tickets available for each event due to COVID-19 restrictions. COVID-19 guidelines will be followed for this event including temperature screening, face mask use, social distancing, etc.
The Bonnie Kate is partnering with the Riverside Taphouse in Elizabethton to make available their craft beers.
To hear more of The Peterson Perkins Quintet’s rocking sound before Tuesday, check out their song recorded in June. This includes vocalist Marion Edwards. Leonard is not included in the song.
https://youtu.be/VYfqXtrIt44.
For more information on Perkins, go to http://perkjazz.com/. Additional pages to check out include: JC Jazz Jam, Johnson City Jazz Festival and Wolf Hills Jazz Quartet.
Event information can be found on the Bonnie Kate Theater Facebook page.
“It’s going to be a great night,” said Treadway.
You Might Like

Carter County Schools will be offering in-person learning at 100 percent capacity beginning Sept. 28.  The decision was made during... read more