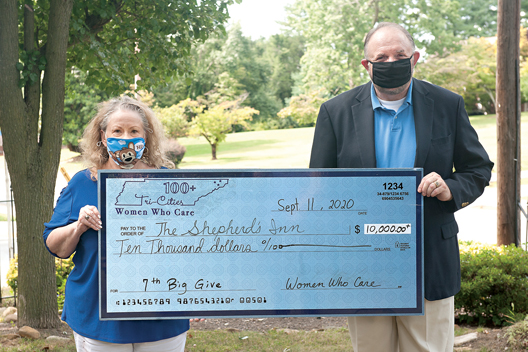 Carter County’s only emergency shelter for women and children received $10,600 in donations from members and friends of 100+ Tri-Cities Women Who Care via the giving circle’s 7th Big Give Event.
“We are thrilled beyond words,” said Paul Gabinet, Executive Director of The Shepherd’s Inn. “All three fundraisers that we planned this year have been canceled because of the pandemic, and as a result we’re going to have a $30,000 shortfall of funding. You can imagine that to receive close to one-third of your deficit is just like manna from heaven.”
In addition to functioning as a shelter, The Shepherd’s Inn also provides resources for housing, job acquisition, and counseling. According to Gabinet, around 13% of women who receive services at The Shepherd’s Inn return to their perpetrator. “The national average,” he said, “is around 55-65% or higher.”
Gabinet stated that funds will be used to make needed improvements to the house. “We plan to repair a leaky roof, replace a floor covering in the living room area, purchase three commercial couches/loveseats for the television room, replace a floor in one of the bathrooms, and place some funds in reserve that will safeguard the shortfall due to the loss of all fundraising events.”
The Shepherd’s Inn joins six other local charities that have received a total of over $76,000 in funding from the giving circle since its first event in February 2019.
According to giving circle member Jenn Owen, collective giving is more important than ever. “In 2020, nonprofit organizations are struggling to raise funds fast enough to meet the growing needs of our community,” she said. “However, 100+ Tri-Cities Women Who Care is stepping up to the challenge. The collective impact of our members exceeds $10,000 each quarter and COVID-19 has not slowed down our efforts.”
New members may join at any time, but nonprofit nominations for the November 2020 Big Give Event will only be accepted until October 9. “Our giving circle needs more women to join so that we can continue to make a collective gift of $10,000 to a local charity every quarter,” said founder Becca Davis. “Some members have moved out of the area and others are unable to give at this time so we’re hopeful that others can step up to take their place.
“Membership means more than just writing a check or making a PayPal donation,” Davis stated. “It means being more connected to others during these divisive times and doing something tangible that makes a significant positive impact on our community. You can be a philanthropist for the equivalent of just 27 cents a day (if you are in a 4-person team) or $1.10 a day (individual member) by joining 100+ Tri-Cities Women Who Care.”
Thanks to a partnership with 98.5 WTFM, the giving circle conducted its most recent event via the TV show A Closer Look. “It is refreshing to be able to help drive the momentum of charity in our community,” said Tiffany Hickman, 98.5 WTFM’s General Sales Manager. “Empowering women to make a difference, networking and lifting up other organizations. It’s a win-win-win!”
A Closer Look host Lynda Fontaine added, “I’m not originally from the Tri Cities. The involvement in such meaningful teamwork like this is what really makes me feel this is my home. I’m so thankful God has allowed me to work in this capacity to help the outreach of such a truly selfless network.”
Community members are invited to donate to The Shepherd’s Inn; area women are encouraged to consider joining the giving circle. For more information, visit www.tricitieswomenwhocare.com.
You Might Like