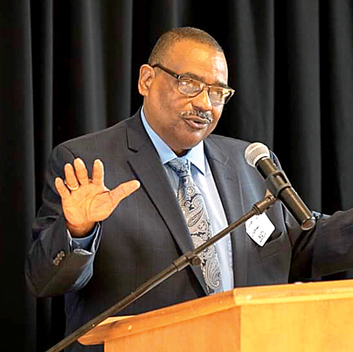 JOHNSON CITY — A new scholarship at East Tennessee State University will support students who are active participants at the Langston Centre in Johnson City.
The center is a multicultural facility focused on arts, education and community leadership. The scholarship is named in memory of Michael Young, a member of the Langston High School Class of 1965 who was the last student to graduate from the school.  From 1893-1965, Langston was Johnson City’s school for African American students. Young passed away April 4, 2020.
This new scholarship is being established between the Langston Education and Arts Development (LEAD) organization and ETSU.  Adam Dickson, supervisor of the Langston Centre, says Young chaired LEAD’s board and was instrumental in advocating for his alma mater and ushering the community-driven effort to create the Langston Centre.
Young served in the U.S. Air Force from 1965-69 and earned a bachelor’s degree in history from ETSU. He retired from CSX Railroad in 2014.
“The Michael Young Scholarship recognizes a really good man who loved his high school,” Dickson said. “This initiative furthers Langston’s motto to ‘Enter to Learn, Depart to Serve’ and will open the door for more young people to learn, grow and ultimately become trailblazers and agents of change.”
For more information about the scholarship, or to make a donation to the Michael Young Scholarship Fund, contact Dessi Foster in ETSU University Advancement at 423-439-5125 or fosterdk@etsu.edu.
You Might Like

Carter County’s only emergency shelter for women and children received $10,600 in donations from members and friends of 100+ Tri-Cities... read more