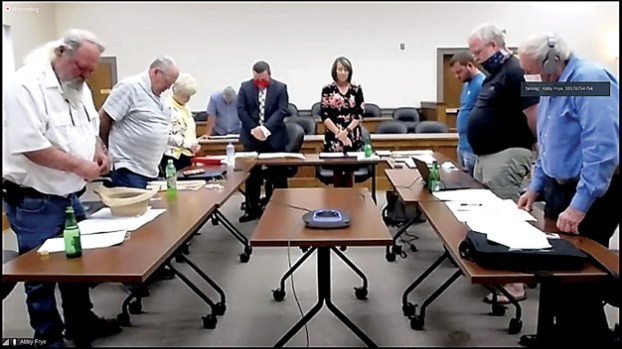 Brittnee Nave/Star Photo The commission held a moment of silence for the late Mayor Barnett as the meeting began, and ended in prayer. The meeting has been recessed until Sept. 28.

The Carter County Commission meeting held a solemn and somber tone on Monday.
Earlier Monday afternoon it was announced that Carter County Mayor Rusty Barnett had passed earlier in the morning.
As the meeting began, interim chair, Patty Woodby, shared a few words about the late mayor.
“I sit before you this evening heavy and brokenhearted. Our county has suffered a great loss today,” she said. “Our mayor had a servant’s heart, from coaching different sports to serving on the school board, working with the city fire department and the county sheriff’s department, to even taking time to drive to Murfreesboro to see local kids play in the state tournament.
“He was always sacrificing and serving our community. To the Barnett family, I am not just speaking for myself, but for every commissioner and member of our county. We are deeply sorry and you are in our prayers. Mayor Barnett leaves a great legacy behind…”
As Woodby tearfully concluded, she asked everyone to stand for a moment of silence in his honor.
It was motioned by Commissioner Bradley Johnson after the moment of silence that the meeting be recessed until the following Monday, Sept. 28, in respect of the mayor’s passing. This motion was revised to suggest a recess for all but the choosing of a chairperson and vice-chair for the Commission following advice from the county attorney, Joshua Hardin.
The motion to recess all but the vote on chairperson and vice-chair was passed unanimously.
Patty Woodby and Isaiah Grindstaff were nominated as the candidates for chairperson. Patty Woodby won the vote 17 to six.
Travis Hill was the selected candidate for vice-chairperson.
As described by Hardin, per state law, Woodby will serve as interim county mayor. The County Commission Chairperson serves as interim mayor with the same powers, duties and bond as the county mayor until the vacancy is permanently filled by the County Commission (which must be done within 120 days). The person appointed by the County Commission to fill the vacancy will then serve until the next general election for which there is time to qualify. It is too late to qualify for the November 2020 election. The vice-chairperson of the County Commission would assume all duties of the chairperson of the Commission while he or she is serving as Interim Mayor.
Following the votes cast for chairperson and vice-chair, the meeting was recessed until 6 p.m. on Sept. 28.
You Might Like

By Lynn J. Richardson In answer to the need to serve more Carter County children, the Boys and Girls Club... read more