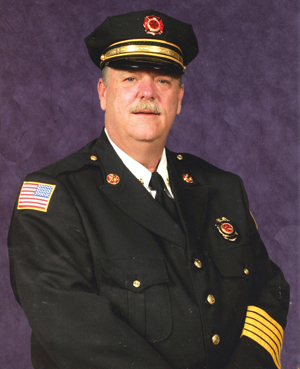 Michael L. Shouse, 64, Elizabethton, passed away peacefully at his home after a very courageous battle with cancer on Monday, September 21, 2020.
A native of Carter County, he was a son of the late Joe B. and Frances “Bobbie” Crumley Shouse. He was a graduate of Hampton High School.
Mike was retired from the Elizabethton Fire Department as Fire Chief, a position that he was extremely proud. He was a member of the following: Tennessee Fire Chief’s Association, Tennessee Fire Inspectors Association, and Tennessee Fireman’s Association. He was also a Hazardous Materials Technician with numerous certifications in HazMat, Certified Firefighter III. He attended Alabama Fire College for ISO Training. There are too many classes and certifications to mention. He was Chairman of the Board of Carter County 911.
Anyone who knew “Chief Shouse” knew that he was full of laughter. He loved to laugh, hear and tell a good joke, but he also had a serious side. He had a love for his family that was unbelievable. Several of his favorite pastimes were riding four wheelers, side by sides and camping, and yet his most favorite thing was mowing his yard. His proudest moment was when he became a grandfather to Hadley and Levi. Michael was a member of Lower Shell Creek Christian Church.
Survivors include his devoted wife of 28 years, Debbie, who never left his side; a son, Michael J. (Ashley) Shouse; sister, Judy Orr; brother, David (Linda) Shouse; his grandchildren, Hadley and Levi Shouse; his father-in-law and mother-in-law, Harvey and Lois Buck; his nephew and nieces, Donna (Jim), David (Stephani) Jr. and Gina; numerous cousins; and a very special aunt, Jean McQueen.
The family will receive friends on Thursday, September 24, from 5 to 7 p.m. with the service to follow at 7 p.m. at the Lower Shell Creek Christian Church, 8726 Highway 19E, Roan Mountain, Tenn., with Pastor Gerald Holly officiating along with the Rev. Harold Mains. The Eulogy will be given by Mr. Danny Hilbert. Active pallbearers, who are requested to assemble at the church at 6:50 p.m. Thursday and also at the funeral home at 9:20 a.m. Friday, will be Michael J. Shouse, Roger Deal, Jack Buckles, Matt Bailey, Barry Carrier, Steve Murray and Don Cogan. Honorary pallbearers will be Harvey Buck, Jim Harrell, Paul Souder, Conner Caldwell, Rick Reynolds, Jim Bowman, Larry Graves, Byron Kennedy, Mark Finucane, Danny Hilbert, Charlie Stahl, Wink Brown, Dale Blevins, Chris Sims, Bobby Bullock, Bob Tiffany, Eddie Clawson, Jason Clawson, employees and former employees of the Elizabethton Fire Department, employees and former employees of the Elizabethton Police Department and all of our friends at East Tennessee ATV. An Honor Guard will be provided by the Elizabethton Fire Department Honor Guard. The family would like to express a special “Thank You” to the staff of Amedisys Hospice, Nurse Megan Renfro, Matt Bailey, Patrick White, Cherie Geagley and Will Johnson for all of the love and support shown to us during Michael’s illness. Family and friends will assemble at the funeral home at 9:20 a.m. Friday to go in procession to Happy Valley Memorial Park. Due to the COVID-19 pandemic, everyone is required to wear a mask and practice social distancing. In lieu of flowers, you may make donations to St. Jude Children’s Hospital. Condolences may be sent to the family at our website, www.memorialfcelizabethton.com.
Memorial Funeral Chapel is serving the Shouse family.
You Might Like