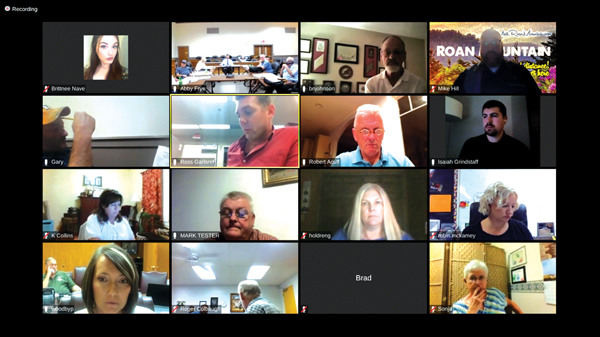 The Carter County Commission resumed their September meeting via ZOOM on Monday evening following a recess the week prior.
It was a meeting of change, though some subtle, as committees were assigned and votes were cast.
Among the first items to be voted on was the election of the Financial Management Committee. Seven commissioners were nominated for the role, and four would ultimately be selected. The original seven were: Travis Hill, Mark Blevins, Ginger Holdren, Bradley Johnson, Austin Jaynes, Randall Jenkins and Robert Acuff.
Those ultimately selected were the following:
Ginger Holdren with 18 votes
Austin Jaynes with 17 votes
Travis Hill with 15 votes
Bradley Johnson with 12 votes
Next was the election of Interim VIce-Chair.
Aaron Frazier, Mark Blevins, Robert Acuff and Isaiah Grindstaff were the four nominated for this position. The top two to be voted on were Blevins and Acuff, narrowing the votes down to them. In the end, Blevins won with 13 votes to Acuff’s nine votes.
Following Committee Reports and Budget Amendments, the Nominating Committee took place.
Patty Woodby, Interim Mayor, took the floor during this part of the meeting. Aaron Frazier was ultimately chosen to be part of the Main Street Program and Robert Acuff was appointed to the Homelessness Task Force.
Prior to his appointment, Commissioner Acuff addressed the Commission regarding the task force. He described the goal of a shelter not being a permanent place for homeless individuals to live, but rather as a place they can get back on their feet.
During Health and Wellness, Acuff took to the floor once more when discussing Broadband. (During Committee Budgets it was voted that $600,000 would be put aside for this project). While meeting their original Oct. 1 deadline for grant funding is not going to occur, work towards additional grants and deadlines is actively underway and anticipated. Acuff spoke on the great opportunity this is for the area.
“I think it’s a real exciting time for Carter County,” he said. “We are long overdue for this.”
Once the meeting reached the Landfill Committee, Commissioner Sonja Culler spoke on decisions being made regarding pricing and contracts being offered to Blue Ridge. It was voted during the August meeting that this would be addressed.
Culler explained that during their meeting Brad Burke, Finance Director, said he would like to do more data on the rates before it is set in place (which will now need to be revisited by Commission).
Commissioner Gary Bailey proposed a motion in response to Culler’s update that everything regarding the topic be put off, including contracts, until Burke can study appropriate amounts to be set.
After discussions over which direction this would lead things in, the motion passed.
As the meeting prepared to adjourn, Travis Hill, Vice-Chair currently serving as Chair, spoke. He expressed interest in a joint meeting with the City Council of Elizabethton as they approach budgets. This was met with support.
Lastly, Hill addressed the mayoral process. He spoke on having an application process after the October meeting. After these are submitted, they would go over to the Election Commission to verify eligibility. He said he would then like to have a special called Q & A session with each person. This would be followed by voting in December.
When asking for feedback on these plans, Acuff showed support.
The meeting adjourned after Hill’s address to the Commission.

It was a rainy day for change at Kiwanis Park early Tuesday afternoon. The Kiwanis Club of Elizabethton held their... read more