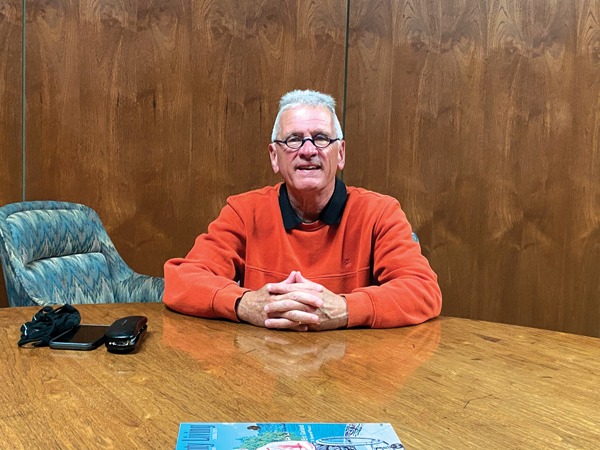 Brittnee Nave/Star Photo Acuff is looking forward to helping those in need with the new homelessness task force.

Commissioner Robert Acuff was appointed to the newly created Carter County homelessness task force on Monday evening.
The task force was approved by the Carter County Commission during their July meeting. This task force is aimed at finding solutions to the growing homelessness population.
Conversations were sparked earlier this year regarding homelessness after River’s Edge Dream Center, which served as one of the county’s only shelters, temporarily suspended overnight stays. Since then, addressing the issue has become a priority for commissioners like Acuff.
Of his new appointment to the task force, Acuff said he is honored.
“I feel very positive about it,” he said. “It is something we have needed to do in Carter County/Elizabethton for quite some time.”
Acuff said he is pleased the City of Elizabethton has also joined this task force by appointing Councilman Mike Simerly.
“I think it’s something we can partner together on and make a difference,” Acuff said.
Acuff’s passion for this task force against homelessness has roots in Knoxville, where he was born and raised. Acuff and his wife are supporters of Knoxville Area Rescue Ministries, KARM, who have made big improvements to the lives of the homeless in Knoxville and have been working on solutions for many years.
When Acuff first spoke on a desire to address the homelessness in Carter County earlier this year, he reached out to KARM director, Burt Rosen. A ZOOM meeting with Rosen would later take place to share ideas.
While in Knoxville, Acuff and his wife were also involved with Knoxville Christian Arts Ministries. The couple was part of a performance group who would serve at jails across the state sharing the gospel in song and drama.
“I think it gave my wife and me a stronger passion for those who were less fortunate, as many of the men and women who found themselves led into a life of crime. Many that are homeless find themselves in that same situation, whether it be a drug or alcohol problem, or just barely making ends-meet,” he said.
Acuff described many people like this being in Carter County, those who are the “working poor,” or just one paycheck away from being homeless themselves.
“It drives the passion I have for people at making sure they are helped by our community,” he said. “Those of us who have been fortunate, perhaps getting educated or finding a good job, to try and make a difference, you want to come back and try to serve your community.”
He described this as giving people a hand-up rather than a hand-out, to accomplish the best they can be.
“This has been my passion for a number of years,” he said.
Along with homelessness, Acuff has a passion for helping children. He is involved with the Boys and Girls Club, with a goal of helping kids succeed as well.
“It’s all about the kids, and I think the kids in this community deserve as much as we can give them,” Acuff said.
Acuff has also been on the College of Medicine Faculty at ETSU for nearly 40 years.
On this task force, Acuff believes it takes a community to make this succeed. Everyone on some level can be involved.
This task force aims to work for a facility that will not be a permanent residence for the homeless, but rather a place to help people get back on their feet. This is the layout for KARM as well.
In addition to Acuff and Simerly serving as representatives on the task force, Brandon Young, Pastor at Harmony Free Will Baptist Church, has been assigned as chair. Others who have been asked to join include: Anne Cooper at the Appalachian Homeless Organization; Crystal Carter at the Washington County United Way; Allison Timbs, Homeless Coordinator for Carter County Schools; Sara Slagle, Director of Loves and Fishes Meal Ministry at River’s Edge; and Pastor Rick of River’s Edge Church. Ginny Wright, executive director for the Boys and Girls Club, has also been approached.
Acuff urged individuals facing homelessness, or those wanting more information, to reach out to him or Young. Acuff can be reached at robert.acuff@cartercountytn.gov, his number is 423-794-6770. Young can be reached at byoungpreacher@gmail.com.
“We want to be part of this. We want to help those less fortunate,” said Acuff.

Spooky season is upon us. Fall is now in full swing, and the uncertainty surrounding COVID-19 continues. This year, which... read more