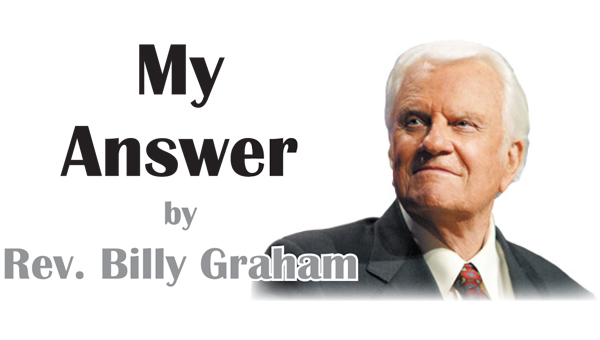 Dear Rev. Graham: Christians are always talking about loving everyone as Jesus did, but then they brag about being God’s special people and being royalty. Doesn’t this seem arrogant? — G.P.

Dear G.P.: Jesus Christ has called out a special people — the church — for His Name. It’s made up of individuals who have surrendered their lives to Him and follow Him in obedience. It doesn’t mean the church is perfect, but it means that its people have turned from the worldliness of life to walk according to His ways while still on earth. The center of faith in Him is to exhibit love to all by declaring His message. “For God so loved the world” (John 3:16).
At the time Jesus spoke these words, the people of His day were worldly. Some dressed in religious garb that belonged to this world — a world ruled by the prince of darkness, a world dominated by pride, ambition, hate, jealousy, greed, and falsehood. The world is still this way.
But when Jesus draws people to Himself, He desires that we set our affections on things above, on the things that glorify Him; refusing to conform to worldly principles and practices, and instead live under the lordship of Christ. This ‘marks’ the church as different.
While the church belongs to Christ, who is the King of kings and Lord of lords, He declared that the world would hate those who followed Him, but He promised to be with us. Abiding in Christ and living under the ruling power of His Holy Spirit is what empowers the church to stand strong in the face of persecution and ridicule.
There are some people who identify as Christians but do not love others. They will answer to God someday. But Christ’s church is distinctive, and the church has contributed to society and influenced millions to embrace Christ as Savior. This is the church triumphant.
————
(This column is based on the words and writings of the late Rev. Billy Graham.)