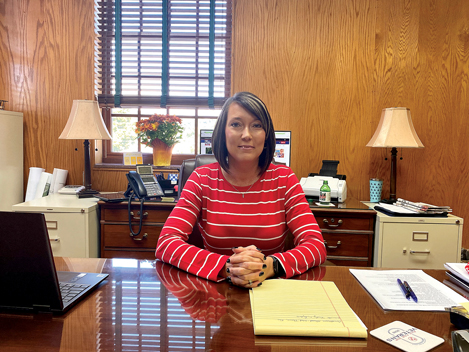 Brittnee Nave/Star Photo Interim Mayor Patty Woodby says she is both excited and humbled by her new role.

Interim Mayor Patty Woodby has a passion for empowering women.
Woodby is the first ChairWOMAN in the Carter County Commission and also the first female mayor as well.
“I’m the first in those two roles,” she said. “I’m proud of that. I have a daughter and I really love to empower women to seek higher roles in offices.”
Woodby says a woman’s perspective is what’s needed.
“I think we need a woman’s perspective in any higher office,” she said. “They offer empathy. I think a woman has that feeling for someone’s situation. That’s just my take on it.”
Woodby is proud of her roles as the first female, noting it took hard work to get there.
Woodby’s work in office began 10 years ago working for the county in the Circuit Clerk’s Office. Two years ago she ran for Commission and was elected out of the 2nd DIstrict. Last year she was placed in the Vice-Chair role of the Commission, and then became Chair after Ray Lyons retired.
During the September meeting of the Commission, which was set to vote for Chair and Vice-Chair, Woodby was voted Chair, and due to the passing of Mayor Rusty Barnett on the same day, she became Interim Mayor.
“That’s how I got here,” she said. “I’m super excited about the new role, but I’m also humbled by it because it’s a new adventure for me.”
During her time in this new role, Woodby said she wants to complete some of the small projects the late Mayor Barnett was working on.
“I know he was passionate about them and I want to see them through fruition,” she said.
Additionally, Woodby wants to become better acquainted with county employees and officeholders.
“The next couple of months that I’m able to be in here are kind of going to be low key but productive,” she said.
In December, the Commission will vote for the next county mayor who will remain in office for the duration of Barnett’s term. This will be based on applicants who will begin submitting applications this month. Woodby said she intends to be one of them.
“I do plan to put in for that, and hopefully I get the support to finish the two-year term out,” she said. “We have a great Commission, great colleagues. So, I hope to get their support to get the opportunity to be the first woman to run Carter County.”
Of her values, Woodby focuses on faith, family and community. She also said she believes in being good to people.
“I want to lead this county in a positive direction,” she said. “I love helping people. I’m a mom, so that just comes naturally I hope.”
If Woodby is not elected to mayor in December for the duration of the term, she will resume duties as Chair of the Commission. If this happens, she said her goal is to keep order and prevent fighting/bickering.
“We’ve got a great group of people,” she said. “Talented, smart. They bring a lot of education to the table. I look to be working with each individual.”
Woodby said for now in her current role as Interim Mayor, she has had nothing but warm welcomes from mayors in surrounding areas and the community. She also misses Mayor Barnett greatly. She recalled Barnett calling her for her opinions at times about what he should do.
“I thought that was so great that he would reach out to someone else and ask what he should do. That’s something I always respected about him,” she said. “He was always a team player. He will be truly missed in this county.”

Scarecrows will be encompassing the fall spirit and promoting unity this year. The annual Scarecrow Contest will be kicking off... read more