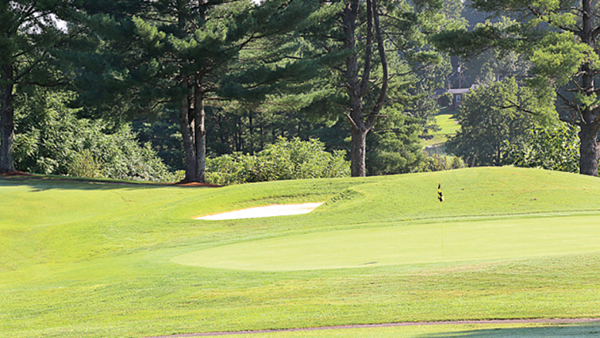 This is a story about three bears…
…just not the fairytale version.
Rey Padilla, the new General Manager at Elizabethton Municipal Golf Course, started his new job in June. Since then, he has been busy getting acquainted with the local golfers, but he certainly didn’t bargain for his newest four-legged “patrons” — a mama bear and her two cubs.
Padilla recently took to the golf course’s Facebook page, warning golfers and those in the adjacent neighborhoods:
“CAUTION: We have a mama bear and two cubs roaming the golf course and neighboring properties. The TN Wildlife Agency is urging all our patrons to please use caution and be aware of your surroundings. If you see the bears — don’t approach them or try to leave food for them. Also, please call Golf Shop so we can warn other golfers. Thank you and please be safe!”
A video of the trio accompanies the warning, captured by the security camera of the bears strolling across the front yard of a nearby Golf Course Drive resident.
While the bears might seem harmless, they are anything but, Padilla says. In addition to safety concerns the bears have created, they also damaged areas on two of the holes, gouging out chunks of the green, 8-10” deep. Fortunately, the damage was a quick fix.
The bears were apparently in search of one of their favorite foods — grubs.
“We do spray and use insecticides, so it is surprising there is anything there that they could smell,” Padilla said.
But it’s no surprise to Dan Gibbs who heads up the Tennessee Black Bear program for the Tennessee Department of Wildlife Resources.
“The bears are just going after a natural food source,” Gibbs said. “I see this in Carter County a lot. You can walk out into fields, and you’ll see swarms of yellow jackets. That’s where bears have dug out a nest to get the larvae, and there’s just not much that can be done to deter that. Maybe just use some kind of insecticide to kill the grubs to get rid of the source.
“Bears really are looking for one thing and that’s something to eat,” Gibbs added. “I tell people, especially if you see a bear walking through the neighborhood, it’s not unusual, but you don’t want them to stop at your property.”
To avoid having bears drawn to your location, Gibbs suggests eliminating the three main food attractions — garbage, grain (birdseed, etc.) and cat food.
“If you see a bear, you don’t want to approach it or, above all, don’t feed it,” Gibbs said. “Yell, throw rocks and try to make yourself look really large. Make seeing people a very negative experience for them.
“As a rule, most people don’t understand that getting rid of bears isn’t as simple as us just coming and taking the bear away,” Gibbs said. “If we move it, then it is just a problem for someone else, and if attractions aren’t eliminated, more bears will come to take its place.
“The Agency really wants to see people and bears co-existing with as few issues as possible. In order for that to happen, people have to make some changes.”
He points out that both the bear and human populations have grown in Tennessee, making the perfect opportunity for there to be more up close and personal encounters.
Gibbs also chairs the southeast Large Carnivore group and as such is a key player in the development of a fairly new website, bearwise.org, which has a goal of teaching people to live responsibly with bears, to be proactive and to eliminate problems.
The site, which Gibbs says he expects to go national as early as next year, also provides resources, information, as well as educational children’s activities and offers things to purchase to deter bears.
For more information and to sign up for monthly E-blasts concerning bears, go to bearwise.org.

COVID-19 and Domestic Violence: There is help, there is hope

Safer at home may be the case during COVID-19, but for victims of domestic violence, it’s quite the opposite. “COVID-19... read more